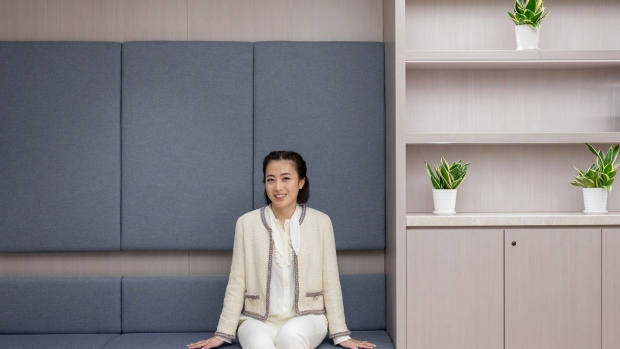 Chan Hoi-wan, chief executive officer of Chinese Estates Holdings Ltd., in Hong Kong, China, on Friday, March 5, 2021. Chan has encountered plenty of skeptics during her unlikely rise to the top of a $1 billion Hong Kong property company. She chooses to ignore them. , Bloomberg

(Bloomberg) -- Chinese Estates Holdings Ltd. sold shares in China Evergrande Group and said it may exit all its holdings, a major withdrawal of support from one of the embattled developer’s long-time backers.

Chinese Estates Chief Executive Officer Chan Hoi Wan, the wife of billionaire Joseph Lau, has been offloading stake in the world’s most-indebted developer as it edges closer to a restructuring. The exit by long-time supporters of Evergrande founder Hui Ka Yan is another sign that the company has lost the confidence of investors as it struggles to make good on its $300 billion in liabilities.

The outlook for Evergrande is deteriorating by the day, with the company and local government hiring advisers for what could be one of the country’s largest-ever debt restructuring. Protests against the company broke out out across China after Evergrande failed to pay retail investors of its high-yield products on time.

Evergrande shares have plummeted this year, sliding 85% in Hong Kong.