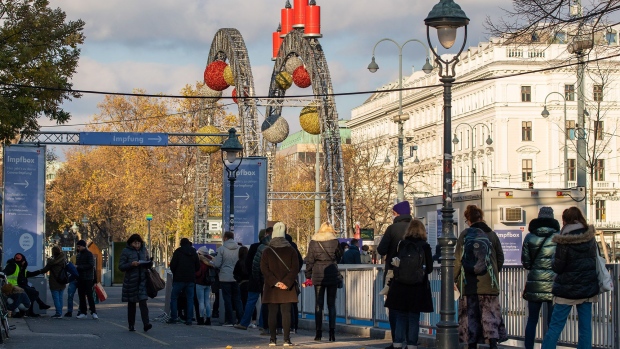 VIENNA, AUSTRIA - NOVEMBER 24: People line up at an 'Impfbox' (vaccination box) at City Hall square on the third day of a nationwide, temporary lockdown during the fourth wave of the novel coronavirus pandemic on November 24, 2021 in Vienna, Austria. The measure, in which people are only allowed to leave home for essentials and to go to school or work, is meant by authorities to rein in COVID-19 infections that have skyrocketed in recent weeks. The lockdown is currently scheduled to last until December 13. (Photo by Thomas Kronsteiner/Getty Images) , Photographer: Thomas Kronsteiner/Getty Images Europe

(Bloomberg) -- A majority of Austrians support government plans to make vaccinations against the coronavirus mandatory.

A combined 60% of respondents saw the government’s recent step as “absolutely right” or “rather right” in a survey conducted by the Unique Research institute for the Profil magazine. That compares with 36% who saw the policy as absolutely or rather wrong.

People not willing to get inoculated may be fined thousands of euros from February, according to initial proposals for the policy.

The share of supporters largely matches Austria’s 66% vaccination rate. That’s one of the lowest in western Europe, although the pace of first vaccinations has picked up this month, to almost 71%.

It’s still unclear whether the government’s plans will be enough to convince more skeptical voters to get inoculated.

Austria was the first nation in the European Union to announce compulsory vaccinations and return to a full national lockdown this week as part of efforts to contain spiraling coronavirus cases and hospitalizations.

According to the survey, support for the mandate was strongest among respondents older than 60, with 72%, and weaker among those under the age of 30, at 47%.

Four out of five voters of the far-right Freedom Party, which has organized protests against the measure last weekend, rejected the motion.