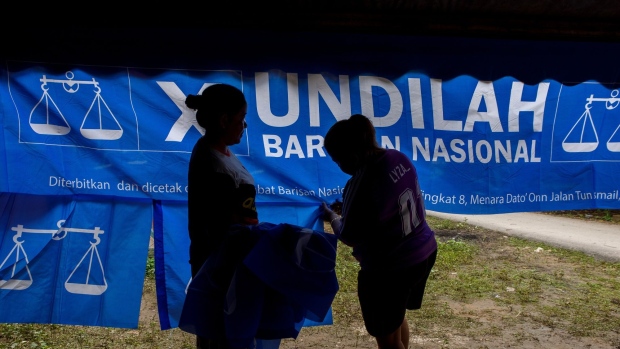 Volunteers hang Barisan National (BN) party flags at a party's camp in a village in Pahang, Malaysia, on Friday, Nov. 11, 2022. Malaysia may get a new prime minister as next week’s elections will consist of multi-cornered fights for most of the 222 parliament seats, prompting political parties to shift alliances to form government. Photographer: Samsul Said/Bloomberg , Bloomberg

Former ruling coalition Barisan Nasional will back and take part of a unity government that isn’t led by Muhyiddin’s pro-Malay, Islamist alliance known as Perikatan Nasional. Malaysian are stocks headed for their biggest gain in 15 months as investors grew optimistic the stalemate would be resolved soon.

Why Malaysia Had Early Elections and What Is at Stake: QuickTake

It has now come down to King Sultan Abdullah Sultan Ahmad Shah, who will have to decide whether Anwar’s reformist, multiethnic Pakatan Harapan or Muhyiddin’s coalition have the support to form government.

The monarch had advised the rivals and Barisan Nasional to form a unity government and is meeting heads of other royal houses in Malaysia on Thursday to deliberate further. Other political parties are increasingly backing the idea of an inclusive, unity government.

A coalition of parties from the Borneo state of Sabah has joined in the growing chorus of parties backing a unity government. Such an administration must be inclusive and involve the Sabah and Sarawak state governments, GRS chairman Hajiji Noor said in a statement.

“GRS is in line with GPS in following whatever decision and advice His Majesty the King makes to create a unity government for the sake of national stability and the well-being of the people,” said Hajiji, who is also Sabah chief minister.

Malaysian stocks headed for their biggest gain in 15 months and the ringgit rose as investors bet the stalemate over the formation of the government was closer to being resolved.

The benchmark KLCI Index jumped as much as 2%, poised for its best day since Aug. 24, 2021. Gaming and brewery companies including Genting Malaysia Bhd., Sports Toto Bhd., Magnum Bhd., and Carlsberg Brewery Malaysia Bhd. jumped after a key political bloc signaled they would support opposition leader Anwar Ibrahim for prime minister.

Democratic Action Party, the largest component of Anwar Ibrahim’s Pakatan Harapan alliance, has apologized to Sarawak’s premier for any past offensive remarks made by its leaders. Support from Sarawak’s GPS bloc, which controls 23 seats, would be crucial in bolstering Anwar’s bid for prime minister.

“I hope today’s meeting will open a new chapter to build understanding and cooperation for a more advanced and progressive Malaysia,” said DAP Secretary-General Anthony Loke after a meeting with Sarawak Premier Abang Johari Openg in the Borneo state.

The bad blood between GPS and DAP -- especially its Sarawak chapter -- runs deep. DAP leader Lim Guan Eng, during his time as finance minister in 2019, had said Sarawak would go bankrupt if it continued to be ruled by GPS.

Islamist party PAS, the biggest in Muhyiddin’s Perikatan Nasional coalition, said it was “still ahead” and urged followers to stay calm. This is two days after Muhyiddin revealed he had rejected the king’s advice to be part of a unity government. PN won 73 seats in Saturday’s vote, coming second to Anwar Ibrahim’s reformist Pakatan Harapan alliance.

“We are working on it. We are still ahead. They plan. Allah plans. We are on the right side,” PAS president Abdul Hadi Awang wrote in a brief post on Facebook. One social media user proposed in the comments section that Hadi become prime minister, as his PAS party won the most seats in parliament.

Barisan Nasional will support and be part of a so-called unity government that is not led by Muhyiddin Yassin’s Perikatan Nasional, the coalition’s linchpin party United Malays National Organisation said.

UMNO’s secretary-general Ahmad Maslan said the party’s newly elected lawmakers will accept unity government or any other form of government as advised by the country’s monarch, according to a statement released early Thursday.

Ahmad also said the UMNO supreme council supports the leadership of Ahmad Zahid Hamidi as BN chairman and party president. The party’s general assembly will be held on Dec. 21.

Barisan Nasional chief Ahmad Zahid Hamidi is facing calls to resign from component party MCA, who said he had misrepresented the coalition’s stance to the king yesterday. When confronted with evidence, Zahid admitted he informed the king that BN supports Anwar Ibrahim as prime minister, even though the BN supreme council had resolved to back no one as premier, said MCA secretary general Chong Sin Woon.

“MCA believes that Dato’ Sri Ahmad Zahid is no longer fit to continue leading Barisan Nasional, and we call for his resignation from his position as Barisan Nasional Chairman, to be replaced by Datuk Mohamad Hassan as proposed during the BN Supreme Council Meeting last night,” said Chong in a statement. Mohamad Hasan is BN election director and the deputy president of BN linchpin UMNO.

BN is set to meet again tonight, according to media reports.

The king has decreed that former ruling bloc Barisan Nasional must be part of a so-called unity government, BN chief Ahmad Zahid Hamidi told Malaysiakini after an audience with the monarch. Two other coalition leaders were told the same when they were granted the royal audience, Zahid added. BN linchpin UMNO is set to meet tonight, and this will be followed by a meeting of the BN supreme council, according to the report.

The king will have a special meeting with the nation’s royal rulers on Thursday. The discussions with the fellow rulers is so that the king can get their views to “make a decision that’s in the best interests and welfare of the nation and people,” according to a statement from the palace.

The gathering will begin at 10:30 a.m. and could last at least three hours, the Star reported earlier, citing palace officials it didn’t name.

Malaysia practices a rotational monarchy, where the nine rulers take turns as king every five years or when a vacancy arrives.

Malaysia’s longest-serving premier Mahathir Mohamad issued his first statement since his defeat in Saturday’s general election. The 97-year-old politician said he was sad but accepted the people’s decision.

Mahathir said he would now focus his attention on writing about the nation’s history, much of which has not been recorded, including the British colonial era. He said he was open to being interviewed by other writers.

“Pejuang is forced to abandon all its plans for the country,” Mahathir said, referring to his party, which didn’t win a single seat out of the 125 that it contested.

Several Barisan Nasional leaders were seen entering the palace grounds this morning, shortly after they had asked the king to postpone their 10.30 a.m. meetings on the choice for prime minister. They include BN chief Ahmad Zahid Hamidi and election director Mohamad Hasan.

Separately, the police have set up roadblocks across the country to “increase their omnipresence to ensure public peace and safety,” according to a statement.

--With assistance from Anuradha Raghu, Ravil Shirodkar and Joy Lee.