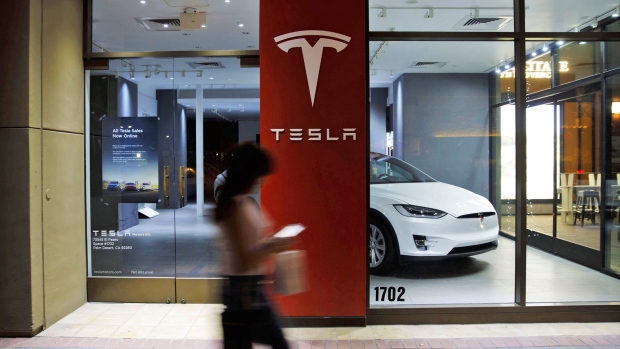 A pedestrian walks past a closed Tesla Inc. store in Palm Desert, California, U.S., on Thursday, March 7, 2019. Tesla has cut prices of the Model 3 and its other vehicles several times this year to offset the lower incentives, most recently by announcing a plan to close most stores and shift all ordering online. , Patrick T. Fallon/Bloomberg

Adam Koszary ran social media campaigns for the Museum of English Rural Life in Berkshire, U.K. where his knack for viral content eventually resulted in Elon Musk changing his profile picture on Twitter to a sheep last month. Now he says he’s landed a job at Tesla to manage the company’s social media.

Tesla and Koszary did not immediately respond to requests for comment.

The jokes first started after Musk tweeted and then changed his profile picture to a sheep found in the museum’s archives. The museum, known as the MERL, responded by changing its own profile picture to a head shot of Musk. It followed up by tweeting a picture of a sheep in space with the caption “maybe.”

“Can we put a sheep into space in a car now please it’s 2019,” the museum asked in another tweet. The MERL, affiliated with the University of Reading, ultimately racked up a total of 133,000 followers, including Musk, who only follows 83 other accounts.