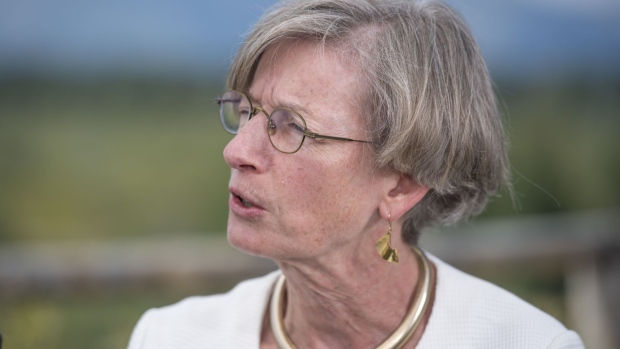 In a speech on Friday, Mann said she is concerned about a self-reinforcing dynamic between wages and prices, and that it’s up to the BOE to temper expectations for those increases. She also hinted that decisive action now could reduce the pace of tightening needed in the future.

The comments are likely to be the last from a central bank official before the February decision, when economists and investors expect the BOE to hike interest rates for the second consecutive meeting. U.K. inflation is currently at a three-decade high of 5.4% and is likely to surpass triple the level of the central bank’s goal.

Expectations for a 25-basis-point next month held steady after her remarks, with traders pricing in a roughly 90% chance of such a move.

“Going into 2022, current price and wage expectations coming from” BOE surveys “are inconsistent with the 2% target, and if they are realized in 2022 are likely to keep inflation strong for longer,” Mann said Friday in the text of a speech to the Official Monetary and Financial Institutions Forum.

“In my view, the objective for monetary policy now should be to lean against this “strong-for-longer” scenario, but at what time horizon and using what tool?”

Mann said she would make her decision about her vote in February only after reviewing the BOE’s latest forecasts.

Still, she also highlighted reasons to think BOE could afford to move slowly on rate hikes further out, including moves made by global central banks such as the Federal Reserve.

If policy makers can bring about a change in inflation expectations through their actions, “it could mean that a shallower path of future rate rises is needed to bring inflation back to target,” she said.

She also voiced optimism that upward pressure on goods prices will dissipate as competitive pressures reassert themselves following the pandemic.

“That competitive pressure I think is a driver that is ultimately going to be the one that keeps global goods prices in check,” Mann said in response to a question following her speech. “Competitive pressure for firms around the world is going to reassert itself.”

(Updates with more comments from speech from second paragraph.)