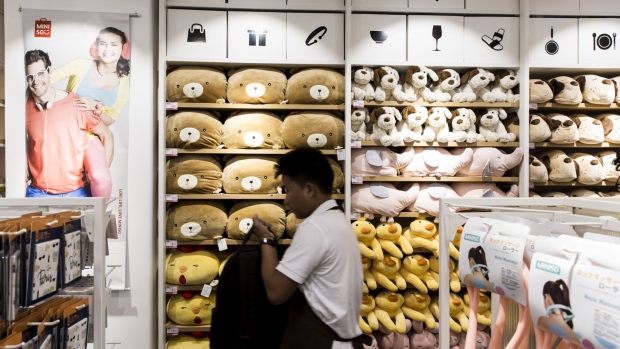 Dollar General has a small e-commerce business, but that hasn’t stopped it from boosting sales 24% in its most recent quarter. Photographer: Christopher Dilts/Bloomberg , Bloomberg

A relatively little known discounter that makes money by flogging household goods at knockdown prices, B&M now has a valuation more than double that of M&S, a struggling British institution and an original member of the FTSE 100 when the index was introduced more than three decades ago. B&M’s rapid growth during a time of lockdowns and social distancing is all the more surprising becaus it relies on brick-and-mortar stores. It’s in a unique class of retailers that are still luring shoppers, despite Amazon driving an online boom.

From Primark and Pepco Group in Europe, to Dollar General Corp. in the U.S. and Asia’s Miniso chain, low-priced retailers are thriving, even with limited e-commerce, or none at all. The global recession triggered by the pandemic has pushed more purchases online, but also accelerated the generational shift toward frugality and discounters that began during the financial crisis more than a decade ago. And middle-tier chains, like department stores, are paying the price.

“We are going to see a broader demographic of customers,” said Andy Bond, chief executive officer of Pepco Group, which operates Poundland, Pepco and Dealz stores in Europe and has been opening hundreds of new locations. Middle-class shoppers turned to discount grocers, like Aldi and Lidl, after the financial crisis, and now that phenomenon is spreading to general discount stores, he said. “We are going into a period of distress for many consumers, and we will do well because we offer low prices and good value.”

Even before Covid-19 pushed Britain into its worst recession in 300 years, GlobalData had projected that the value of the country’s discount retail market could jump 36% by 2022 to 32.5 billion pounds ($41 billion).

The FTSE 100’s newest retailer aims to increase its total number of B&M-branded U.K. stores to at least 950 from 656 now. Primark has also opened more shops, including one in Paris during the pandemic that attracted more than 1,000 customers on the first day.

Now that governments are once again imposing tougher restrictions to curtail a resurgence of the virus, discounters may benefit further as consumers shift spending from leisure and entertainment back to groceries and household goods. Britain urged people on Tuesday to keep working from home and warned that new measures are likely to be in force for the next six months.

The coronavirus, meanwhile, has exacerbated the struggles of mid-tier merchants like Macy’s Inc. and J.C. Penney Co. Apparel sales have dropped by double-digit percentages in the U.S. in recent months, while the fashion brands that are in demand during quarantine—think Nike or Lululemon—can sell directly to consumers. Mid-tier chains often anchor shopping malls, which, save for the luxury emporiums that cater to high-end shoppers, have suffered massive declines in foot traffic.

As many as 25,000 stores could close in the U.S. this year, mostly in malls, according to Coresight Research, and more than 25 major retailers have filed for bankruptcy this year. The approaching holiday season could be make-or-break for many. Most retailers plan to start their holiday promotions as early as October, setting up a battle to grab shoppers before their gift budgets run dry.

Discounters typically spend little money on advertising, relying instead on word of mouth and plenty of well-located stores in local shopping centers and main streets to attract customers. The model also depends largely on the supply chain and the sourcing of low-cost products.

Some Chinese suppliers said they are experiencing mid-double-digit growth from a year ago in overseas orders of low-priced products from supermarkets and discount stores, as well as increased online sales direct to consumers.

“Chinese suppliers are one of the biggest beneficiaries when people are seeking more low-priced products,” said Ben Chu, editor-in-chief of Made-in-China.com, one of the main platforms connecting the country’s suppliers and global buyers. He says there was a similar pickup in demand for low-cost manufacturing during the downturn that followed the SARS outbreak 17 years ago.

Miniso, a chain that sells $1.50 eyelash curlers and $2.20 headphones, is rapidly expanding overseas. The company attributes the success of its franchise model—it now has more than 4,200 stores in 80 countries—to a supply chain that allows it to frequently bring new and trendy products to shelves.

Similarly, Primark can sell cheap T-shirts, dresses and skirts because it buys in bulk from Asia and ships the clothing by sea freight. Primark has increased its market share since Covid, despite not selling online. The Dublin-based retailer has a website that it uses just to showcase new arrivals and engage with consumers.

For many in the value space, the economics of e-commerce don’t work yet because the low prices make the cost of home delivery disproportionately high. That could change if cheaper ways to bring goods to consumers develop.

“People couldn’t get the Primark prices online, and that is why they are coming back to the stores,”said John Bason, the finance director of Primark’s owner, Associated British Foods Plc. “There were all those dire warnings about everyone getting into the habit of only shopping online, but that hasn’t happened.”