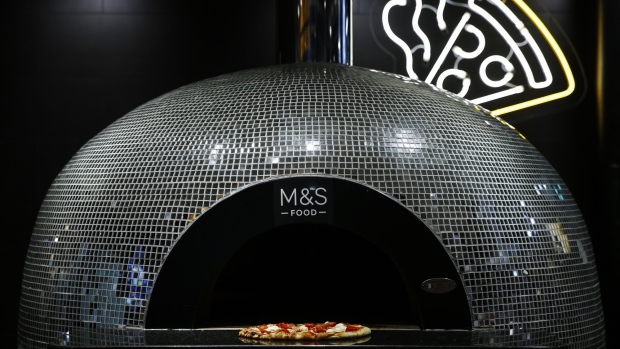 Produce on display in the store. , Bloomberg

The store looks more like a Whole Foods Market than one of the 135-year-old British retailer’s more traditional outlets. Alongside piles of avocados and herbs grown with the help of artificial intelligence -- there are three kinds of basil -- it features a wood-fired brick oven coated with glittering mirror tiles like those on disco balls.

What’s absent is just as important: The clothing that’s been a mainstay of the retailer’s large outlets for decades but has become a tough sell, hampering its turnaround efforts.

M&S, an institution in the U.K., is threatened from all sides. Its business of selling both clothing and food has exposed it to competition from the likes of Amazon.com Inc. as well as fast-fashion chains such as Zara and discount grocers like Lidl and Aldi.

Because of a shift toward online shopping and a Brexit-related slump in consumer confidence, U.K. retail is deep in a funk that has prompted chains like Debenhams Plc and House of Fraser to shut dozens of stores. Last month, M&S, one of the original members of the FTSE 100 Index, was kicked out of the stock benchmark for Britain’s biggest companies.

The new store moves the company beyond the comfort zone its food business has occupied until now -- offering niche items and lunch fare like hoisin duck rolls that aim to make grocery shopping more exciting than a trip to the supermarket, at prices accessible to a middle-England clientele. The company jazzed up the Clapham site further with services such as wine and coffee experts, setting it apart from Marks & Spencer convenience stores.

The new style reflects a strategy that Stuart Machin, M&S food managing director, calls “protecting the magic and modernizing the rest.” The company plans to open several similar stores before the end of the year to test whether they can turn around its fortunes.

The stock has lost more than half its value since 2015. The clothing arm has suffered a long decline as it failed to stay as nimble and cheap as rivals. As clothing revenue shrinks, Marks & Spencer now gets almost two-thirds of its sales from food.

Even the food segment has suffered setbacks, though. M&S expects to close around 25 smaller Simply Food stores, as well as a further 85 full-line stores this fiscal year as it reorganizes the business.

The shares have sunk further on concern over the company’s plan to finance the Ocado venture. M&S has also endured an exodus of top managers, with the head of clothing departing in July and Chief Financial Officer Humphrey Singer resigning last month.

Berenberg analyst Michelle Wilson said the changes won’t take hold immediately. “M&S is undertaking the necessary restructuring,” she wrote. “But until that transformation is complete, it is fighting with one hand tied behind its back against more agile peers.”

Rowe, a three-decade veteran at the retailer, has a tough boss: Chairman Archie Norman, who joined in 2017 and is known for a no-holds-barred turnaround of grocer Asda.

The CEO acknowledged at a recent investor meeting that the transformation of the M&S clothing and homeware business -- which generates around half of its profits -- is about 18 months behind schedule. While the picture is rosier in food, Berenberg’s Wilson questioned how much of a recent improvement in volume has been driven by price cuts.

Fighting for market share in a cutthroat retail sector filled with online, discount and fast fashion incomers has left M&S looking “increasingly isolated,” say HSBC analysts Paul Rossington and Andrew Porteous. If one of Britain’s most historic brands is to thrive once more, it’s going to have to entice a new generation of shoppers through its doors -- and not just in Clapham.

To contact the reporter on this story: Greg Ritchie in London at gritchie10@bloomberg.net