'There is a second war going on' for the prosperity of Canada: Nik Nanos

Consumer confidence fell to a record low last week, surpassing even the worst numbers from the Great Recession after the coronavirus pandemic shut down much of the economy.

The Bloomberg Nanos Canadian Confidence Index, a composite gauge based on a telephone survey of households, declined sharply for a third week as extensive lockdowns triggered mass layoffs. The aggregate index dropped to 42.7 last week, the lowest reading since polling began in 2008. 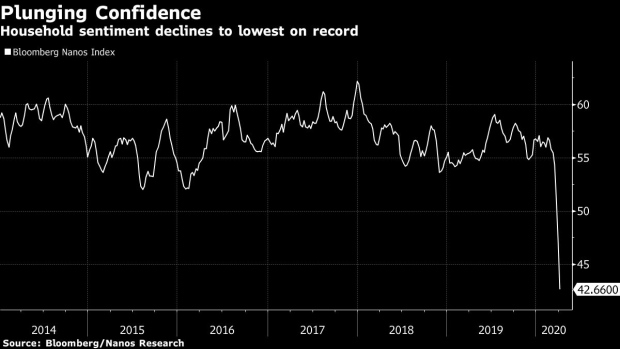 The survey paints a bleak picture of economic anxiety across regions, age groups and most income levels.

Polling for the confidence index began in 2008 on a quarterly, then a monthly basis until 2013, when it switched to weekly tracking.