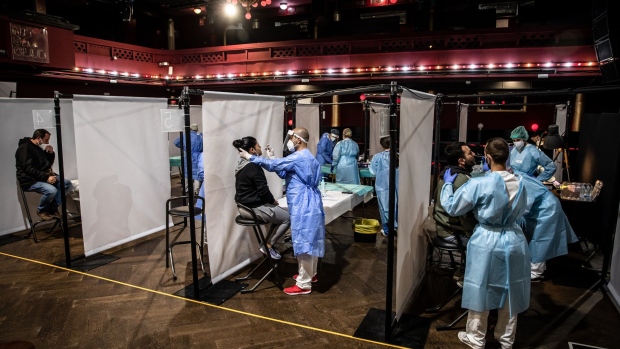 Health workers take swab samples from attendees for a pre-event Covid-19 test ahead of a concert by Love of Lesbian at (VENUE) in Barcelona, Spain, on Saturday, March 27, 2021. The public, the staff and the band are part of a mass experiment that organizers say is the largest concert without social distancing of the coronavirus era. , Bloomberg

As the musicians stroke the first chords on their electric guitars, the singer takes the stage, grabs the microphone and cries: “All the weirdos were there at the concert, of the great mind reader from Dublin.”

At his feet, 5,000 electrified fans sing, jump and dance to the indie pop hit. It might be any Saturday night gig in 2019, if it weren’t for the masks, the whiff of sanitizer and the tickets proving a negative COVID-19 test.

“Don’t take off your masks because the success of live music in Europe and the world depends on this concert tonight,” singer Santi Balmes says between songs. Before the music started, giant screens showed videos of doctors encouraging people to follow the rules.

The public, the staff and the band -- Love of Lesbian -- are part of a mass experiment that organizers say is the largest concert without social distancing of the coronavirus era. The event on Saturday in Barcelona offers a glimpse of what mass gatherings may look like for a long time after the pandemic subsides.

“If we can prove that you can gather 5,000 people using rapid tests, then we’re opening the door to doing many more things,” said Gemma Recoder, one of the organizers and the director of the Canet Rock festival. “It’s a key step not just for live music but for everything else, from conferences to sports events.”

To get in, you couldn’t just turn up at the Sant Jordi stadium a few minutes before the start and get a ticket at the door. Fans had to download an app, input their contact details and book a time for a rapid COVID test on the day of the concert.

People testing negative got a code to gain entrance to the building, while those who tested positive were offered a refund. Inside, masks were mandatory and the public was divided in three areas holding about 1,600 people.

The event was put together by the organizers of some of Spain’s largest music festivals including Sonar, Primavera Sound and Cruilla Barcelona Festival, in partnership with regional health authorities, doctors and epidemiologists at Hospital Germans Trias i Pujol in the nearby city of Badalona.

It follows a pilot concert in December in Barcelona that gathered 500 people. Preparations for the second phase took months, Recoder said, and included following advice on health protocols and a renovation of the stadium’s air ventilation equipment.

“The air you’re breathing inside now has the same quality as the air outside,” said Jordi Herreruela, an organizer and director at Cruilla Barcelona Festival. “Doctors tell us it might be safer to be at the concert than walking in the street because we have created a sanitary bubble in which we know everyone is tested.”

Attendants’ data has been crossed-referenced with data from public health authorities so if someone tests positive during the two weeks after the concert, organizers will know.

Statistically, about 10 per cent of the people present could become infected during that time. But if that percentage becomes unusually high, then organizers and authorities will get in touch with the concert-goers and take measures to contain the spread of the virus.

The event hasn’t turned a profit, but organizers hope that faster and cheaper rapid tests will make mass live music possible in the near future, offering a lifeline to one of the sectors hit worst by lockdowns.

Concert halls were the first to close and will likely be among the last to open, Recoder says. Festivals like Sonar, which gathered over 100,000 people in Barcelona in 2019, or Primavera Sound, which drew 63,000, weren’t held in 2020 and still won’t be held this year.

“The effects of this pandemic on live music have been devastating,” Recoder said. “That’s why we’re as nervous as if this was the first concert of our lives and, in a way, it is.”