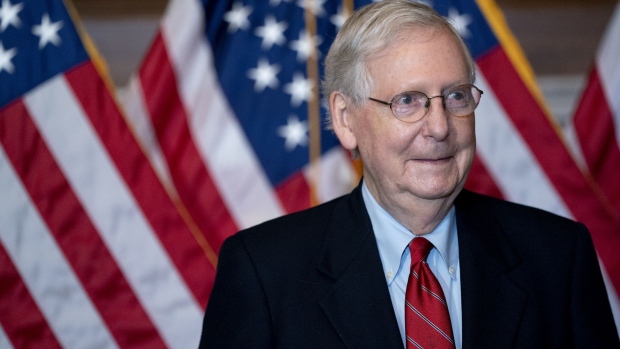 Senate Majority Leader Mitch McConnell, a Republican from Kentucky, stands for a photo at the U.S. Capitol in Washington, D.C., U.S., on Monday, Nov. 9, 2020. Few Republican officeholders have been willing to publicly dispute President Donald Trump as he attacks the integrity of the election system, underscoring how he will remain a potent force in GOP politics even if he ultimately loses the White House. Photographer: Stefani Reynolds/Bloomberg , Bloomberg

(Bloomberg) -- Senate Majority Leader Mitch McConnell said Monday that Congress should pass a limited stimulus bill before the end of 2020, in the wake of encouraging data on a Covid-19 vaccine and a slide in unemployment.

President-elect Joe Biden warned on Monday that the U.S. was facing a “dark winter” with the coronavirus, while hailing the news from Pfizer Inc. that its experimental vaccine may be 90% effective.

The U.S. economic recovery has continued even with the expiration of fiscal support, albeit at a slower pace, giving Republicans ballast in their argument for lesser emergency spending. The U.S. jobless rate fell by a percentage point, to 6.9% in October, data showed Friday.

McConnell said that the Senate should pass relief in the post-election congressional session, which began Monday and is slated to end in mid-December.

“To be clear, our work is not finished. Too many Americans are still suffering economically,” he said.

Senate Republicans have supported a $500 billion virus package, without $1,200 stimulus checks for individuals or aid to states and local governments.

Schumer on the Senate floor called on Republicans to pursue a “bipartisan solution” rather than the stunts of recent months.

House and Senate Democrats continue to push for a $2.4 trillion measure. House Speaker Nancy Pelosi said Friday that a smaller bill “doesn’t appeal to me at all.”

“That isn’t something we should be looking at,” she said.

The U.S. Chamber of Commerce on Monday called on Congress to complete a package this year as the economy has yet to recoup losses since the hit from Covid-19. The U.S. still has more than 11 million workers unemployed.

“We have not yet beaten the coronavirus or achieved the economic recovery we all desire. Our leaders have wasted five months already. They can’t waste another three,” chamber vice president Neil Bradley said in a statement.