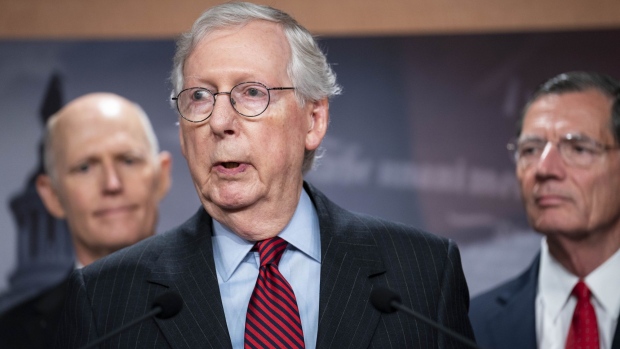 Representative John Yarmuth, a Democrat from Kentucky, speaks during a news conference on the Protecting Our Democracy Act at the U.S. Capitol in Washington, D.C., U.S., on Tuesday, Sept. 21, 2021. House Democrats set up a Tuesday vote on a bill that would suspend the U.S. debt ceiling through December 2022 and temporarily fund the government to avert a shutdown at the end of this month. , Bloomberg

(Bloomberg) -- Democrats have plenty of time to use a partisan approach to raise the debt ceiling without Republican votes, Senate Minority Leader Mitch McConnell said, challenging the argument of a senior House Democrat that the clock had likely run out on that option.

McConnell said on the Senate floor Thursday it would take Democrats “about a week or a little more” to use the so-called budget reconciliation procedure to raise the debt limit. Senate Democrats have so far resisted employing that tactic, saying that the effort should be bipartisan -- as it has been in the past.

“This may inconvenient for them, but it is totally possible,” McConnell said. “This Democratic government must not manufacture an avoidable crisis.”

The Senate is expected to vote next week on legislation to temporarily fund the government past the Sept. 30 end of the fiscal year and suspend the debt ceiling until December 2022. McConnell and other Republicans have said they will block that bill in order to force Democrats to address the debt limit without GOP support.

McConnell’s comments challenge House Budget Committee Chairman John Yarmuth, who said Wednesday that Democrats probably do not have enough time to raise the U.S. debt ceiling on their own using the fast-track budget process before the default date.

It’s not yet clear when the U.S. Treasury could be on the brink of a default, adding uncertainty to how quickly Congress needs to act. Treasury Secretary Janet Yellen has said the debt limit will be reached at some point in October.

Yarmuth, at one point, had urged House Speaker Nancy Pelosi to raise it to “a gazillion dollars” to make the debt ceiling inoperative for years to come.

Pelosi and Senate Majority Leader Chuck Schumer both say that Republicans would be to blame if a default were to occur. The limit was raised with bipartisan support three times during the Trump administration and Democrats point out the higher limit will allow the government to make payments on debts already accrued.

Democrats are not universally opposed to using the partisan path to raising the debt limit. House Ways and Means Committee Chairman Richard Neal said in an interview with CNN he’d be open to using reconciliation.

“If we had to do it, I would do that,” Neal said, according to CNN. “I mean that the idea that America would default on debt is so far removed from everything I’ve ever entertained or thought of since I’ve been here.”

Alabama Senator Richard Shelby, the top Republican on the Appropriations Committee, said he expects “at the end of the day” the Senate will pass a stopgap government funding bill that doesn’t have a debt limit increase on it and that Democrats will move the debt-limit increase through reconciliation.

Reconciliation bills bypass the filibuster, removing the need for GOP votes in the 50-50 Senate, but have required procedures that take time to go through.