With the pandemic igniting a collective reassessment of work, imagine posting openings for low-wage jobs that could require standing for 12-hour shifts, working six-day weeks and repeatedly lifting 70-pound objects in conditions that range from steaming hot to bloody and ice cold. And on top of all that, your industry recently made headlines for COVID-19 outbreaks that killed workers.

This is precisely what meatpackers are facing.

Of all the industries experiencing crunches for hourly labor, it’s hard to find one with a greater recruiting challenge. Companies have tried all the usual tricks to lure applicants, including offering signing bonuses of as much as US$3,000, but they’re still short workers and, as a result, there are an increasing number of sparse shelves.

For America's meateaters, this is a problem. Some cuts have soared 25 per cent over the past year, while others are fetching near record prices, making meat one of the biggest contributors to pandemic inflation. And industry experts expect meat to keep gaining through the holidays and beyond.

“The sticker shock is what we all need to be prepared for,” said Bindiya Vakil, chief executive officer of supply-chain consultant Resilinc. “This is here to stay, at least through the summer of 2022.”

Before COVID, meat processors struggled to meet their labor needs, which increased the hiring of immigrant workers mostly from Mexico. More than a third of the workforce was foreign born, according to a 2020 report by the Economic Policy Institute. That hurt the industry when the Trump administration curtailed immigration.

The pandemic only exacerbated the hiring woes, while raising new concerns about how meatpackers will recruit in the long term. The industry expected the labor shortage to get easier after extra unemployment benefits in the COVID relief ended in September, but it hasn’t. Across the overall job market, the number of people quitting is surging and job openings remain near all-time highs. Online postings for meat processing positions are up 66 per cent from a year ago, according to Emsi Burning Glass, an analytics firm. 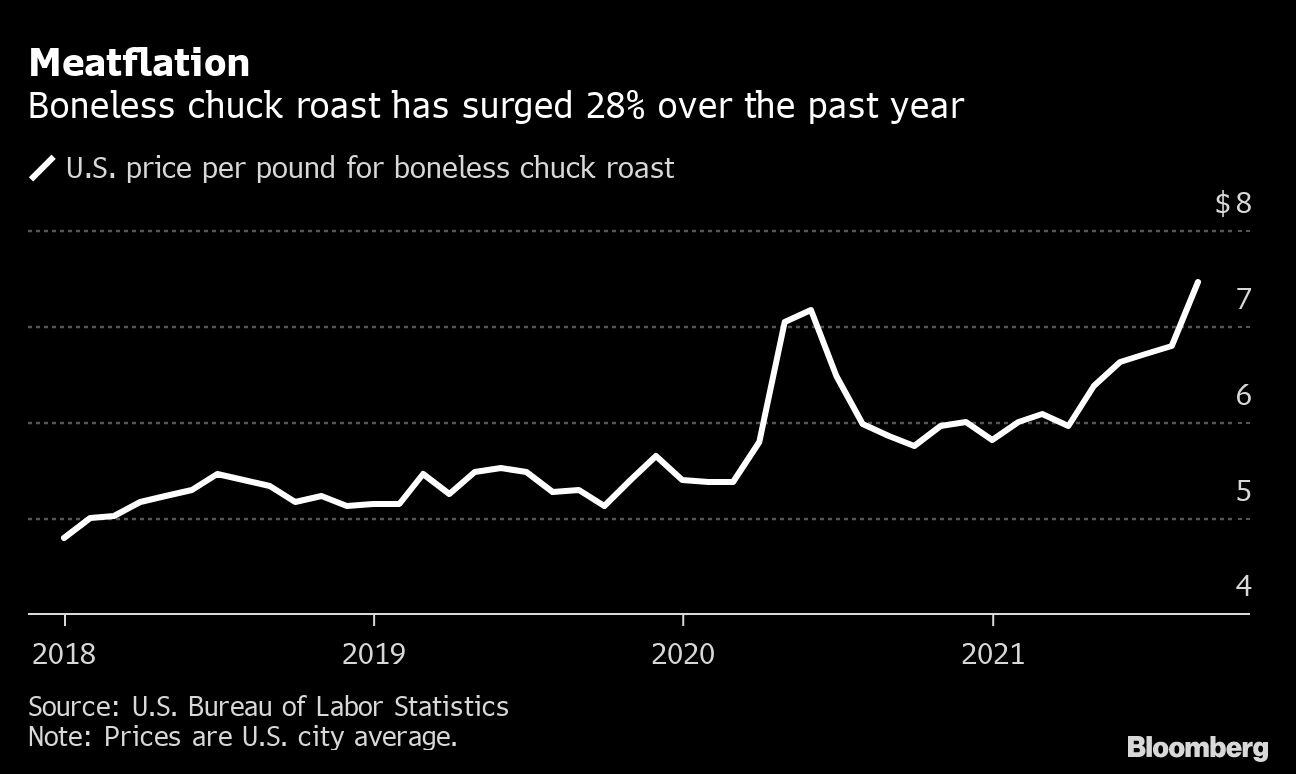 Meanwhile, retailers and shipping companies are adding to the pressure with plans to hire hundreds of thousands of workers for the holidays. Amazon alone aims to bring on 150,000 temps, a 50 per cent increase from a year ago, at an average starting hourly wage of at least US$18, which exceeds or matches a lot of meat processing jobs. The labor battle in retail has been intense for years, pushing chains to boost pay and add benefits such as parental leave and college reimbursement.

Christopher Young, executive director for American Association of Meat Processors, said there isn’t an easy answer. But the industry is working to establish butcher programs at colleges and internships. He also said meatpackers need to get better at marketing their career opportunities, a hurdle facing other fields that rely on blue collar workers.

“It can be difficult to compete with some of the wages being offered, as well as the type of work,” said Young, who has been with the trade group since 2013. “Our industry can be hard work, but also rewarding as you are meeting the needs of feeding people. It is going to take a while to get people back to work.”

Meat processors can also invest in automation to boost productivity and reduce labor, according to Glynn Tonsor, a professor of agricultural economics at Kansas State University. However, the industry has been pursuing this for years with little to show for it, he said. It’s also pushing for the federal government to expand work visas.

The dearth of staff has caused bottlenecks, especially for offerings that need extra labor to cut meat off the bone. Hams are selling at a record. Prices for sirloin, boneless chuck roast and bacon have jumped by about 25 per cent over the past year.

The price gains have gotten the attention of the White House, which claimed the biggest meat processors were profiteering at the expense of farmers and consumers — a charge the industry denied.

So the industry does have room to keep increasing pay, but that might not be enough. Entry-level roles at warehouses, retailers and restaurants generally pay less than a meat plant, but processing animals is more taxing with workers donning face shields, masks and gloves and sometimes doing repetitive cutting motions for hours on end.

There’s also the blood and guts, and how the industry mishandled COVID. Early in the pandemic, rural areas with meatpacking plants became epicenters of the virus. By late April of 2020, infections in those geographies were 10 times the rate of other rural counties, according to a government report.

Cooks Venture, which sells pasture-raised beef and chicken, is emblematic of what’s happening. It has struggled to fill the night shift at a plant in Oklahoma. And that’s with starting wages of as much as US$20 an hour, plus health insurance and US$1,500 signing bonuses.

“It's still hard to find good people who want to work in a chicken plant, regardless,” said CEO Matt Wadiak, also a co-founder of Blue Apron. “Everybody is struggling for people.”