Day traders who have been flocking to all things crypto in recent weeks have rediscovered their zest for meme stocks.

Similar to the earlier mania, the catalyst for the latest advances seems to have come from social media. The hashtag #SqueezeAMC trended on Twitter Monday, in a call to recreate the heavy retail buying in January that forced investors out of bearish positions on GameStop and other stocks. AMC, which has was also the most-cited stock on online message board Stocktwits over the weekend. 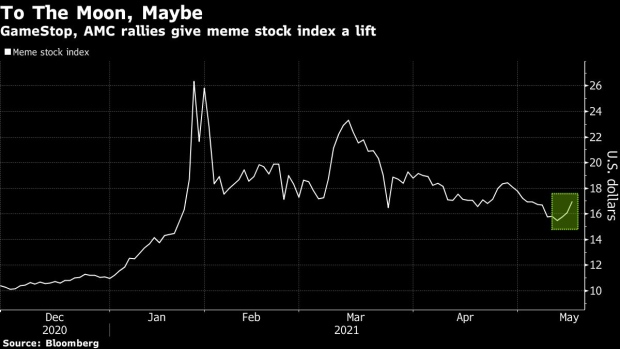 Participation by retail traders swelled to 24 per cent of all U.S. stock market action during the first quarter, according to Bloomberg Intelligence’s Larry Tabb. Stocks the group favored soared, including a 1,600 per cent rally in January by GameStop. But those bets turned sour in the second quarter, with some of the Reddit targets falling more than 50 per cent.

At the same time, demand for cryptocurrencies surged, sending some alternatives to Bitcoin into eye-popping rallies reminiscent of the meme-stock frenzy. That buying has started to show signs of cooling, with Tesla Inc.’s Elon Musk denting the price of Bitcoin with back-and-forth utterances on the electric-car maker’s plans for the token.