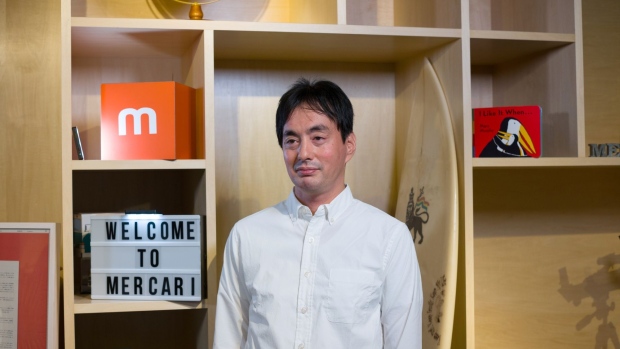 Shintaro Yamada poses for a photograph in Tokyo on Sept. 15. , Bloomberg

(Bloomberg) -- Mercari Inc. wants to become the top provider of mobile payments in Japan even as its biggest rivals join forces, but that ambition is second to making the business profitable.

The company’s immediate focus is on improving profitability and expanding the lineup of merchants that accept payments using its Merpay service, founder and Chief Executive Officer Shintaro Yamada said in an interview. Mercari, whose second-hand market app is used by over 17 million people each month in Japan, is in no rush to compete for users with Line Corp. and SoftBank Group Corp.-backed PayPay, Yamada said.

Mobile payment competition is heating up in Japan, where the government has been trying to reduce the dominance of banknotes and coins. Line, the operator of Japan’s biggest messaging service, and e-commerce giant Rakuten Inc. had an early start in payments, followed by PayPay and then Mercari. PayPay -- backed by SoftBank, Yahoo Japan and India’s Paytm -- took the lead by sparking a shopping frenzy with 10 billion yen ($95 million) in rebates on purchases. Now SoftBank is looking to combine Yahoo Japan with Line, while Mercari has partnered with NTT Docomo Inc., the country’s dominant wireless carrier with its own payment business.

“This doesn’t have to be a winner-takes-all market. There is no reason why it can’t be more like credit cards, where no one company controls it all,” Yamada said. “But if we are talking end-game, eventually, we want to beat the current No. 1 -- PayPay.”

PayPay counts over 30 million registered customers and will soon gain access to 84 million Japanese users on Line’s messaging service. Merpay, launched in February 2019, has more than 7 million monthly active users and is accepted at more than 1.6 million stores. While Mercari’s user base is smaller, it has an advantage in payments because many of its customers already hold a cash balance as the result of selling goods on its app. The company, which reported a 22.8 billion yen loss for the year ended June, has said it aims to make Merpay profitable after the year ending June 2021.

“We have the beginnings of a business that can be tremendously profitable in the future,” Yamada said. “For now, instead of expanding our user base, we are focusing on increasing profitability and synergies with the main business.”