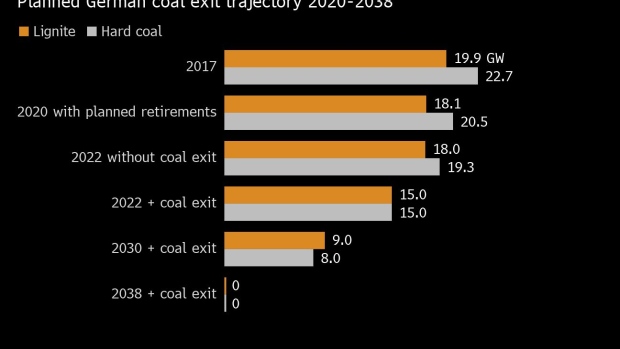 Eleven months after a government-appointed panel mapped an exit from coal power, an official said divisions remain over compensation that will be paid out to owners of shuttered coal plants, as well as mechanisms to support Germany’s flagging onshore wind industry. That raises the likelihood that the coal bill won’t pass before parliament begins its Dec. 20 furlough, according to officials.

The draft was pulled from Cabinet agenda Tuesday after Environment Minister Svenja Schulze complained that proposals to restore growth in onshore wind had been pulled from the final draft, according to a ministry official who asked not to be identified because the cabinet meeting was private.

The draft needs ministers’ approval before going to parliament, suggesting action will be kicked into 2020, the person said. The Economy and Energy Ministry is making every effort to bring the legislation back to the cabinet as soon as possible, a spokeswoman said.

A delay would be a potential embarrassment for Merkel. The coal exit plan and her sweeping Climate Protection Program 2030 bill are centerpieces of German efforts to get back on track in meeting emission reduction targets. Bickering between the states and federal government may mean that approval of the climate legislation could also drag into next year.

To contact the reporters on this story: Brian Parkin in Berlin at bparkin@bloomberg.net;William Wilkes in Frankfurt at wwilkes1@bloomberg.net

To contact the editors responsible for this story: Reed Landberg at landberg@bloomberg.net, Jonathan Tirone