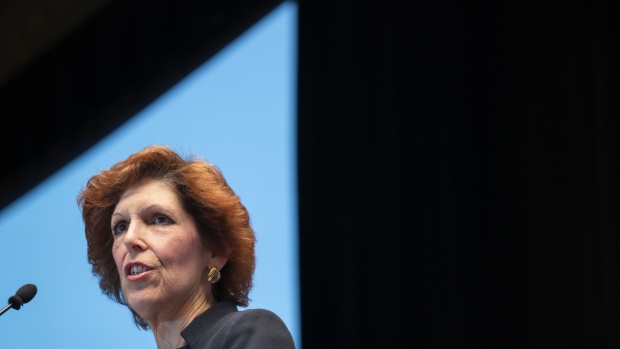 (Bloomberg) -- The U.S. economy has met the Federal Reserve’s conditions for starting to reduce its asset purchases, which it should commence in November, and the test for raising interest rates will likely be satisfied by the end of next year, Federal Reserve Bank of Cleveland President Loretta Mester said.

“I support starting to dial back our purchases in November and concluding them over the first half of next year,” Mester said Friday in prepared remarks to an Ohio Bankers League virtual conference. “As the recovery continues, labor markets will continue to improve, and I expect that the conditions for liftoff of the fed funds rate will be met by the end of next year.”

Mester is the first Fed official to speak following the Sept. 21-22 Federal Open Market Committee meeting, where Chair Jerome Powell said the central bank could start tapering its monthly purchases of $80 billion of Treasuries and $40 billion of mortgage-backed securities as soon as its November meeting. Echoing remarks from Powell earlier this week, Mester indicated the Fed won’t start raising interest rates until after it completes the tapering process.

Mester’s comment regarding interest-rate liftoff suggests that she is one of the nine FOMC participants that projects at least one rate hike next year. The 18-member committee was evenly split at this month’s meeting as to whether the Fed would raise rates next year or later.

Monetary policy will remain very accommodative even after the Fed starts the tapering process, Mester said. While the Fed’s inflation target has “largely been met,” the labor market is still short of the central bank’s maximum employment goal.

“The number of payroll jobs and the labor force participation rate are still well below where they were prior to the pandemic, and unemployment rates are still well above their pre-pandemic levels,” Mester said.