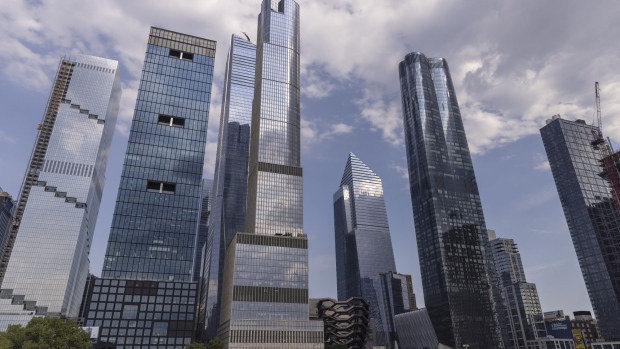 Hudson Yards during a heat wave in New York, US, on Wednesday, July 20, 2022. With temperatures rising into the 90s Fahrenheit, New York City and the Northeast heading into its longest heat wave of the summer. , Bloomberg

(Bloomberg) -- Facebook parent Meta Platforms Inc. is giving up some offices at Manhattan’s Hudson Yards as the company seeks to slash expenses and cull its workforce.

Meta will return its space at 30 and 55 Hudson Yards to landlord Related Cos., according to people with knowledge of the plans, who asked not to be named because the matter is private. Meta, which leases more than 250,000 square feet (23,000 square meters) across the two towers, has declined the option to renew its lease, which runs through 2024, the people said.

The social media giant in 2019 agreed to rent more than 1.5 million square feet spread among three towers at the development on Manhattan’s far west side. Most of the space is at the third building, 50 Hudson Yards. Meta is subleasing a small amount of space at that tower, according to spokesperson Tracy Clayton.

Bloomberg reported in July that the company halted plans to further build out its offices at 50 Hudson Yards while it evaluates its real estate in New York, which includes about 730,000 square feet at the redeveloped Farley Building across from Pennsylvania Station.

“We remain firmly committed to New York City as evidenced by the opening of the Farley Building, further anchoring our local footprint,” Clayton said. “We also look forward to opening 50 Hudson Yards, which is estimated to be complete next year.”

Meta is scaling back its real estate as Chief Executive Officer Mark Zuckerberg embarks on a wide reorganization of the company, cutting thousands of jobs while pausing hiring. On its third-quarter earnings call, Meta said it expects to take a roughly $2 billion hit related to consolidating its offices and exiting space.

Large tech companies have driven office leasing in New York during the pandemic, even as they allowed flexible, remote-working options. Some firms have since pulled back in the wake of broad stock-market declines and growing fears about the US economy heading into a recession.

Earlier this year, Meta backed out of a deal to add 300,000 square feet to its space at 770 Broadway, a building near Astor Place. The firm also is shutting down its offices at 225 Park Ave. South.