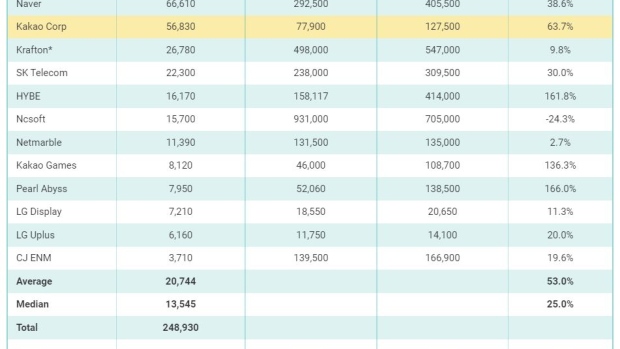 (Bloomberg) -- Metaverse stock fans are finding that South Korea is a go-to Asian market to bet on the technology, with a host of exchange-traded products and shares up for grabs.

Korea’s ETFs focused on the metaverse, many of them newly listed, have seen double-digit gains this month to trump the Kospi benchmark’s 0.3% decline. Aside from the popular U.S.-listed Roundhill Ball Metaverse ETF, most other vehicles focused on the concept are hosted in South Korea, according to Bloomberg-compiled data.

Prices for Mirae Asset Tiger Fn Metaverse ETF -- the largest in the country by market value, Samsung Kodex K-Metaverse Active ETF, NH-Amundi HANARO K-Metaverse MZ ETF and KB KBSTAR iSelect Metaverse ETF have jumped by at least 24% since they all launched on Oct. 13.

“South Korea is the fastest-growing metaverse ETF market globally, reaching $100 million in assets in just under two weeks,” said Bloomberg Intelligence analyst Rebecca Sin. “Flows are driven by retail demand and this trend may continue in the region with Australia and Taiwan to follow.”

The metaverse, bringing together both virtual and augmented reality, has become a buzzword for markets after Facebook Inc. rebranded as Meta Platforms Inc. in late October to highlight a shift of focus to the concept. That’s led to a boom in everything from related U.S.-listed ETFs and Taiwanese suppliers to China’s virtual reality stocks as investors try to get a piece of a market estimated to grow to $800 billion by 2024.

Korean metaverse ETFs have attracted combined inflows of $278 million this year with a sizable chunk coming in over the past week, according to data compiled by Bloomberg. Assets in those funds could surpass $600 million by the end of this year, with 90% of the record flows attributed to retail investors, BI’s Sin said.

“The metaverse theme was clearly visible for the Korean video game publishers this recent earnings season,” wrote Morgan Stanley analyst Seyon Park in a note. The brokerage upgraded NCSoft Corp. to overweight on Tuesday, bringing its rating in line with Pearl Abyss Corp.

Publishers that can use play-to-earn and non-fungible tokens “to enhance the gaming experience will emerge as beneficiaries,” Park said. Shares of NCSoft and Pearl Abyss are up 16% and 36% in November, respectively.

“Metaverse ETFs in Korea could be a leading indicator of the Korean stock market and the metaverse related stocks in general,” wrote analyst Douglas Kim in a note on the Smartkarma platform.