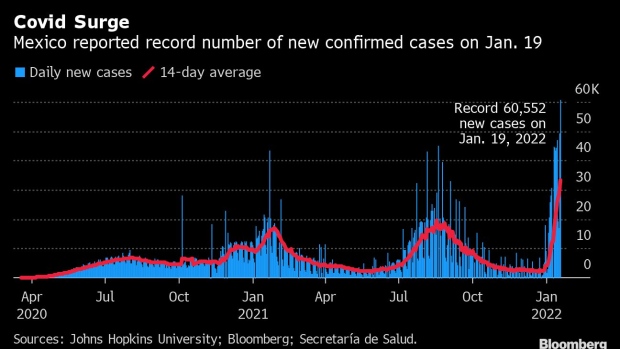 Residents wait in line to receive a dose of the Astrazeneca Covid-19 vaccine at a vaccination clinic in Mexico City, Mexico, on Wednesday, Jan. 19, 2022. In less than a week Mexico has registered three daily records in terms of case numbers in line with Europe and the United States, where day by day numbers have been exceeding those of the day before. , Bloomberg

(Bloomberg) -- Mexico registered a record number of new Covid-19 cases Wednesday -- more than double the amount seen in previous waves -- as the omicron variant extends its spread through the country.

The country recorded 60,552 new coronavirus cases, pushing total cases up to 4,495,310, according to data from the Health Ministry. Deaths increased 323, the highest amount since November, to put the cumulative toll at 302,112.

As cases have risen, President Andres Manuel Lopez Obrador has downplayed the impact of the omicron variant. AMLO, as he’s known, returned to his daily press conferences on Monday, after he contracted the virus a second time, and said Mexico is coming out of the illness and that the country has done well.

“It’s demonstrable that this variant doesn’t have the same severity as the previous one, the delta variant, in terms of symptoms and also recovery time,” AMLO said.

Despite the president’s reassuring words, hospitalizations in Mexico have been rising. General hospital occupancy has doubled since the beginning of the year to where now 37% of beds are occupied, according to Health Ministry data. In Mexico City, occupancy levels doubled since Jan. 3 to 58%. Even so, the city’s mayor, Claudia Sheinbaum, said last week there’s no saturation problem and hospitals are able to add more beds if needed.