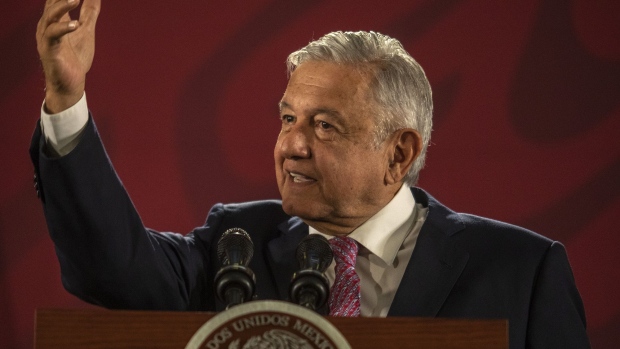 (Bloomberg) -- Mexican President Andres Manuel Lopez Obrador’s administration plans to support Argentina in the race to lead the Inter-American Development Bank, a key Washington-based multilateral lender, in another sign of political rapport between the region’s two most important left-wing governments.

Mexico understands that Gustavo Beliz, currently President Alberto Fernandez’s secretary for strategic affairs, is Argentina’s candidate, and Lopez Obrador’s administration will be backing him, the press office of the Mexican Finance Ministry told Bloomberg News. The Argentine government hasn’t publicly said yet if it will field a candidate and declined to comment on Mexico’s support.

The bank is the top development institution dedicated to Latin America and the Caribbean, providing loans and technical assistance to countries in a region with chronic infrastructure and economic shortages. Its president, Luis Alberto Moreno, a former Colombian ambassador to the U.S., was first elected in 2005 and re-elected twice. The next head will start a five-year term in October after a selection process scheduled to start in coming months.

The press office of the IDB, as the bank is commonly known, declined to comment on the process. The institution approved lending of $13.5 billion in 2018.

Beliz’s name is among those that have been discussed as candidates for the job, according to two people familiar with the process, who didn’t want to be identified because they aren’t authorized to speak publicly. Fernandez’s government has begun calling around to other countries to seek support for Beliz, according to one of the people.

Mexico’s support for an Argentine candidate highlights the increasing bond between the governments of the second- and third-largest economies in the region since the inauguration of Fernandez in December. Fernandez visited Lopez Obrador as president elect in November, his first trip abroad after the election. Foreign Minister Felipe Sola also visited Mexico City to meet with local officials earlier this month.

The decision also comes after the administration of AMLO, as the Mexican leader is known, had earlier considered and decided against a candidacy by the country’s Economy Minister, Graciela Marquez, according to two people familiar with the conversations.

Mexico’s Finance and Economy ministries declined to comment on Marquez.

Argentina received the support of Mexico in a letter, but it hasn’t decided on a candidacy at this point, a person with direct knowledge said, declining to be identified because the talks are private.

Beliz has extensive experience at the IDB. He previously ran the bank’s Institute for the Integration of Latin America and the Caribbean, which focuses on the impact of new technologies on trade and integration. He also worked on citizen security at the organization from 2006 to 2013. In the early 2000s, he served as justice minister to President Nestor Kirchner, for whom Fernandez served as cabinet chief.

The IDB president is chosen by the board of governors. The U.S. has a 30% share in the bank, making it the most important stakeholder, followed by Brazil and Argentina at 11% each and Mexico at 7.2%. One area of potential friction between the biggest shareholders is Venezuela, where the U.S. and Brazil have called for President Nicolas Maduro to step down while backing opposition leader Juan Guaido. Fernandez and AMLO have refused to do so.

Selection of the next head will be among the most talked about topics at the bank’s annual governor’s meeting in Colombia in March, with the decision likely being made between July and September.

--With assistance from Jorgelina do Rosario.