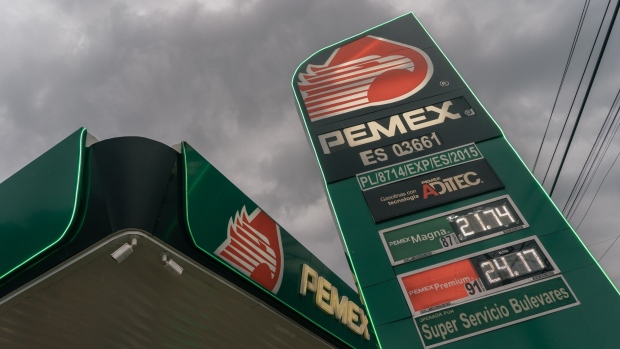 (Bloomberg) -- Petroleos Mexicanos plans to issue bonds in the coming weeks as the indebted Mexican state oil company looks to pay off maturities coming due in the first quarter, according to three people familiar with the situation.

The company will issue bonds in order to help pay off billions of dollars worth of debt amortizations due before the end of March, the people said, asking not to be identified commenting on private plans. Pemex, as the company is known, is likely to seek at least $2 billion in new issuance and needs to go to the market before a blackout period starting Feb. 12, one of the people said.

The issuance comes as Pemex faces almost $10 billion in bond amortization payments due this year — a sum that neither the company nor the government included in their annual budgets. Of that amount, between $5.5 billion and $6 billion is due in the first quarter alone, according to Pemex Chief Executive Officer Octavio Romero Oropeza.

The company’s bonds fell on Tuesday, extending declines after Bloomberg reported the plan to sell new debt. Notes due in 2050 fell a cent to 74.9 cents on the dollar, according to Trace bond-trading data.

“We are getting to the point where the indebtedness of the company is getting outrageous,” Luis Maizel, co-founder of LM Capital Management in San Diego. “They said there would be no new issuance. But when you have no option, you have to get the money somewhere.”

The Mexican government stopped covering Pemex’s debt amortizations in the second half of 2022 as oil prices surged. Yet President Andres Manuel Lopez Obrador has said that the government could provide additional financial aid if Pemex can’t meet its debt obligations. In addition to the issuance, the oil producer could receive a capital injection from the government or delay paying its profit-sharing duty, known as DUC, to free up cash, one of the people said.

The government-owned oil giant has seen its oil production decline almost every year for the past decade and a half, while its debt has soared to $105 billion, the highest of any oil company. Lopez Obrador’s nationalist energy policies have added to its woes as the company is pressured to focus on refining more crude domestically instead of exporting it.

The decline in oil prices since the second half of last year also worked against Pemex. Still, as volatility in global markets has abated in the new year, so issuers in Mexico should take advantage, Maizel said. The government already sold $4 billion in bonds.

“Mexico is now the darling for many,” Maizel said. “It is the right time to take advantage of this.”

Still, the company’s bonds have handed investors returns of 6.9% so far this year, outperforming a Bloomberg index of dollar-denominated debt from corporations and countries in Latin America, which has returned 4.4% during that time.