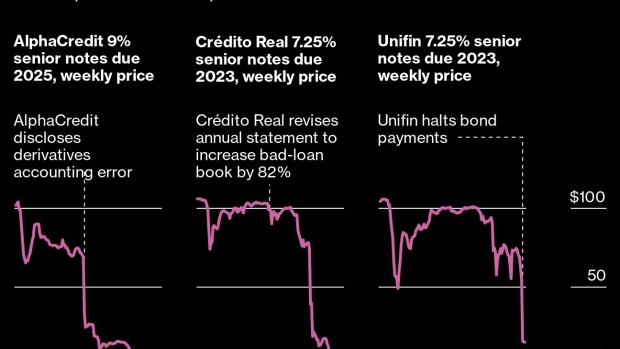 A year into the pandemic, Panton, who was then a debt strategist in New York for Stifel, Nicolaus & Co., had been snarkily warning that the math underlying Crédito Real SAB de CV didn’t add up. Hedge funds and big banks had ignored him, instead backing the company, a rising star of Mexico’s shadow banking industry that borrowed cash from big-time foreign investors and cut smaller loans to low-income people and businesses.

But in a middle-of-the-night revision, the microlender was admitting that its bad-loan book was 82% larger than it originally disclosed—just the type of issue Panton had cautioned about.

The revision, alongside an accounting error disclosed the same week by a smaller payroll lender called Alpha Holding SA de CV, known as AlphaCredit, would eventually lead to a collapse of Mexico’s alternative banking sector, a wipeout of almost $5 billion for foreign bondholders, and a series of debt restructuring battles in the country’s opaque courts that are undermining the faith of investors in Latin America’s No. 2 economy. That’s not to mention the nightmare left for Mexicans who rely on such nonbank loans to handle financial emergencies or to keep their businesses running.

Omotunde Lawal, head of emerging-market corporate debt at Barings Ltd., likens the shadow banks’ situation to that of Mexican homebuilders in a housing implosion a decade ago. “The businesses eventually disappear, and other institutions pick up the business,” Lawal says. “It seems clear that the market will have a large level of distrust and skepticism going forward.”

Just a few years ago, the shadow banking industry seemed full of promise. In a nation where only 37% of adults have bank accounts, shadow banks were lending far more money than regulated banks for mortgages and company financing, according to Mexican central bank data.

For investors on Wall Street and beyond, that smelled like opportunity. What’s more, then-newly elected President Andrés Manuel López Obrador was on board with letting the industry remain loosely regulated. While considered a leftist, López Obrador rejected a bid from his party to regulate financial fees, saying in early 2019 that “banks should be regulated by banks.”

Of course, companies such as now-defaulted AlphaCredit, Crédito Real, and Unifin Financiera SAB de CV weren’t really banks. For the most part they were borrowing cash at single-digit interest rates, then turning around to lend at double-digit rates to Mexicans who couldn’t get financing from the country’s big, conservative banks. Growth in the business model relied on originating ever more loans, yet doing so came at the expense of credit quality.

Panton, who’s since been hired by BNP Paribas SA and declined to comment for this story, saw the wheels starting to come off Crédito Real’s business even before Mexico’s president decided not to provide economic stimulus in response to the pandemic, sending the economy into recession. As early as spring 2020 he pointed to something amiss in the revenue from the distributor companies that actually made Crédito Real’s loans.

Crédito Real traces its roots to a Mexico City-based household appliance manufacturer, Controladora Mabe SA de CV. The family that controls Mabe created Crédito Real from what had been a small financing operation providing loans to customers who bought Mabe refrigerators and other goods. Eventually, though, the company became a darling of investors by staking out a niche in Mexico’s financial system with payroll loans to government employees and pensioners, transactions that were too small and difficult to be of interest to big banks. As of the third quarter of 2021, Crédito Real said it was doling out loans to small and midsize businesses averaging 3.3 million pesos ($165,000) at a typical interest rate of 23.6%, used-car loans of 202,103 pesos at 28%—and, most dramatically, payroll loans worth 68,354 pesos at a borrowing rate of 54.4%.

For a while there was no shortage of excitement among money managers, who snapped up about $5 billion in international bond sales from the three now-defaulted companies from 2016 to the end of 2021, according to data compiled by Bloomberg.

AlphaCredit was co-founded by two Harvard MBAs, José Luis Orozco and Augusto Álvarez, and began operating in 2011 as a financial technology company offering payroll loans in Mexico. It was selling international debt by 2017 and launched a digital-lending app a year later. In the first weeks of 2020, before Covid-19 shuttered cities, SoftBank Group Corp. announced a $125 million investment in AlphaCredit’s business, marking a peak of global investor euphoria.

Dollar bonds from Crédito Real and Unifin were trading above par in April 2021 when AlphaCredit disclosed a derivatives accounting error that sent its bonds plunging more than 40¢ on the dollar. Days later, Crédito Real revised the size of its bad-loan portfolio by about $36 million, or 82% higher than it had originally disclosed. Both companies defaulted and entered bankruptcy proceedings. AlphaCredit and Crédito Real didn’t respond to messages seeking comment.

Companies that can’t pay back bondholders still expect customers to stay current on payments. A bold message on AlphaCredit’s website warns that even though it no longer offers new loans, existing borrowers must keep paying or face “bad credit history.”

Unifin, Mexico’s largest shadow lender, defaulted in August 2022—just weeks after its chief executive officer snapped at investors during an earnings call about how healthy the company was. Unifin, which specializes in business equipment leasing, was a stalwart of the industry and had insisted throughout the collapses of AlphaCredit and Crédito Real that it would expand its business and thrive. Unifin declined to comment.

Wall Street is left to wonder what comes next. “This may turn investors completely off the industry,” Omar Zeolla, an analyst at Oppenheimer & Co., said after the default. “Until now, we thought that Alpha and Crédito Real were unique occurrences. But Unifin’s announcement makes this more of an industry issue.”

For now, investors in AlphaCredit, Crédito Real, and Unifin are hoping for restructuring deals that will pay some portion of the outstanding debt balances on bonds trading for pennies on the dollar. But the process is already proving arduous, with ever-shifting corporate leadership and cases proceeding through both US and Mexican courts.

Wall Street analysts are becoming more pessimistic on the sector. In August, Bank of America cut its ratings of bonds issued by other Mexican shadow banks it tracks—including Operadora de Servicios Mega, Financiera Independencia, Mexarrend, and Credivalores-Crediservicios—to “underweight.” S&P Global Ratings also downgraded the debt of four of the remaining six Mexican nonbank financial institutions it monitors, lowering its rating on Mexarrend by one notch to B-. The Mexico City-based lender to small and midsize businesses has a $30 million bond coming due in October.

The future looks bleak for Mexico’s shadow lenders, according to Rafael Elias, a managing director for fixed income at BancTrust Investment Bank Ltd. in New York. The business depends on strong consumer spending, he says, which hasn’t recovered in Mexico since the pandemic. And its customers are people considered “nonbankable,” he adds. “Eventually, the sector disappears—the sector dedicated to consumer loans and small and medium businesses,” Elias says. “There are other companies that do it now: Servicios Mega, Financiera Independencia, Mexarrend. But I don’t see why local banks and international markets would lend them capital when Unifin—arguably the strongest of them all—couldn’t get it.”