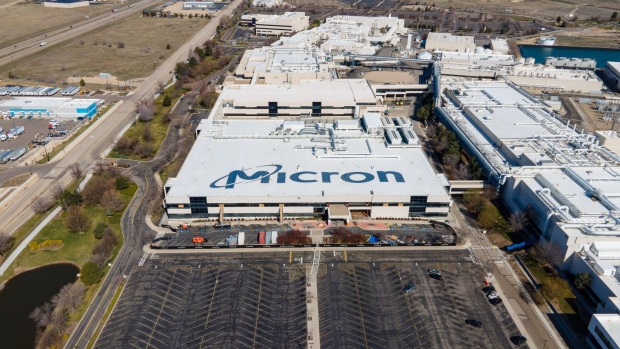 (Bloomberg) -- Micron Technology Inc. plans to slow hiring as it copes with a sudden drop in chip demand, but the company joined peers such as Intel Corp. and Nvidia Corp. in deciding that major job cuts aren’t yet necessary.

The memory-chip maker has no plans to reduce its headcount and won’t be making large-scale layoffs, according to a person familiar with the situation. The assurances come at a time when Micron is cutting its forecast and dealing with a build-up of inventory. The company said earlier Tuesday that fourth-quarter sales are expected to be at the low end of or below its previous guidance.

In a typical downturn, chip companies have relied on layoffs to cope with sluggish results. But the industry just lobbied for passage of the Chips and Science Act, a landmark federal bill that will pump $52 billion into domestic semiconductor production. That’s made it an especially difficult for chip companies to be seen cutting jobs.

Intel assured employees at an all-hands meeting last week that it wouldn’t be eliminating positions across the company. Nvidia made similar assurances this week after warning that revenue was more than $1 billion short of what it expected last quarter.

In an internal memo, Nvidia Chief Executive Officer Jensen Huang said the company would steer clear of cuts and even give out raises to help employees deal with inflation. He said he remains confident in the opportunities for the chipmaker’s technology, according to the memo.

Representatives of Intel, Micron and Nvidia declined to comment. Insider previously reported on the Nvidia memo.

The mood of the industry has darkened considerably since the start of the year, when many executives still believed the chip business was in the early stages of an uninterrupted expansion. With semiconductors going into a wider range of products -- from cars to smart appliances -- the hope was the industry could rocket toward $1 trillion a year. But then demand in key markets such as personal computers and smartphones began slipping.

Holding onto workers, particularly engineers, could signal that chip executives are still confident in the industry’s growth prospects. The current slump is seen as an “inventory correction” -- a slowdown caused by customers working through their inventory -- rather than a more fundamental problem.

“We continue to believe we are entering the worst semiconductor downturn in at least a decade, and possibly since 2001,” Christopher Danely, a Citigroup Inc. analyst, said in report Tuesday. He expects “every end market to experience a correction.”