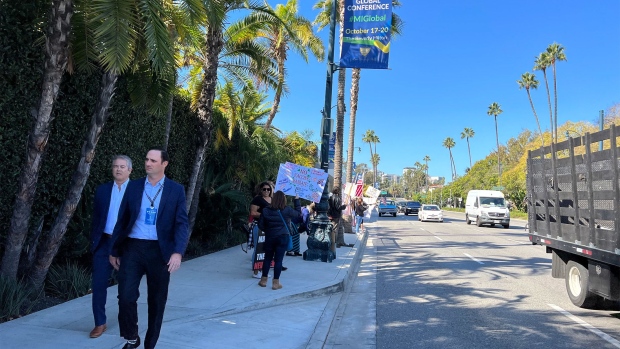 Anti-vaxxers outside the Milken conference on Oct. 19. , Photographer: Davide Scigliuzzo/Bloomberg

(Bloomberg) -- A billionaire walks into the Hilton suite, chucks a pack of the Citigroup-branded chocolate on the table and rips off his Hermes tie: “God, I have not worn one of these in two years.”

The occasion is this week’s Milken Institute Global Conference, where the U.S. investing elite gather in Beverly Hills, California, to bask in each other’s glow and set out to solve the world’s problems. For a world tottering back to normal, it’s a test of whether what’s old can be new again -- a step back to the panels, poolside dealmaking and evening excesses that have come to define the event for more than two decades.

This year, the confab has fittingly matched its theme of “Charting a New Course,” highlighting both the disruptions and innovations brought on by the Covid-19 pandemic.

At a time when all corners of financial markets are booming, there were big grins shielded by compulsory KN95 masks. For many attendees, it was their first time traveling for a big conference since the pandemic began.

Gone is the famed party at the Pritzker mansion, replaced by a smattering of outdoor gatherings. The attendance is halved, and Covid rule-enforcers in neon-pink vests patrol the halls with a stop sign that says “please wear your mask.” In a crowd of financiers and dealmakers who aren’t used to being told what to do, some quickly adopted the hack of having water or coffee constantly on hand to allow for an excuse to go maskless.

The lobby at the Beverly Hilton in the past was shoulder to shoulder with conference-goers. Even with this year offering a more intimate gathering, it still managed to catch a few attendees off guard as they tried to return to the hobnobbing of old.

A Washington lobbyist ran back to her hotel room to get more business cards mid-conference because she’d underestimated how many she’d need after more than a year of not using any. Carlyle Group Inc. partner Macky Tall said he wrestled with whether to fist-bump, shake hands or hug an industry colleague he hadn’t seen in two years. He settled on a hug.

For some, the event is watered down. For others, it’s a welcome return to an intimate setting among their own. Ex-Treasury Secretary Steven Mnuchin and former Commerce Secretary Wilbur Ross roamed the hallways, at ease in their natural habitat after a four-year run in the Trump administration. Ross is scavenging for deals for his own special-purpose acquisition company, the cherished toy this year for every recognizable financier.“The Stock Exchange was very nice to welcome me back with the ROSS stock symbol for my SPAC,” Ross said. “So I feel like I have a vanity license plate trading on the New York Stock Exchange.”

Private equity billionaire Leon Black, who left his firm Apollo Global Management Inc. this year following a backlash over his business ties to sex offender Jeffrey Epstein, was spotted attending a panel that featured his son.

The musician Questlove walked around the conference and spoke in a session about food. Actress Uma Thurman interviewed entrepreneur Christian Angermayer about the use of psychedelics to improve mental health. After hours, GoldenTree Asset Management hosted a dinner that included special guest John McEnroe autographing tennis balls.

Attendees are discovering how the nature of conference-going and work itself has changed in the nearly two and half years since the last in-person Milken gala. Remote work and the ubiquity of Zoom have made it possible -- and created expectations -- for people to be available from wherever they are. The days of escaping day-to-day tasks to focus on networking and absorbing content are gone. One person listened to a panel while using one AirPod to dial into a conference call.

Then there are the more blatant disruptions, with a small throng of anti-vaxxers lining the entrance to the venue and shouting at attendees. Organizers redirected guests moving between the Hilton and Waldorf Astoria to avoid the protesters. Some people were yelled at for just wearing a mask. A BMW drove by honking in support of the demonstrations.

Disturbances aside, many attendees were happy to be back traveling and seeing so many people in one big gathering again. And with Milken expected to return to its traditional schedule in the spring of next year, there’s another opportunity to rub elbows again soon.

One private equity executive ducked out Sunday to see the Rolling Stones at the new SoFi Stadium. The band closed the night with their song “Satisfaction.”