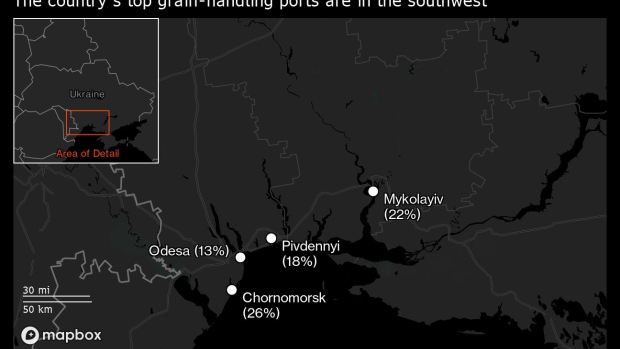 Silos at the UkrTransAgro LLC grain terminal at the Port of Mariupol in Mariupol, Ukraine, Thursday, Jan. 13, 2022. Mariupol Mayor Vadym Boichenko said the city, just miles from the front lines in Ukraine, is turning into the country's"shop front window" to show how a reintegrated Donbas could be rebuilt. , Bloomberg

(Bloomberg) -- Resuming Ukrainian grain shipments will be time consuming given challenges that include mine-clearing in Black Sea ports and the need for cooperation from the very country that kicked off the war, Lithuanian President Gitanas Nauseda said.

Nauseda is among a small group of European leaders pushing for naval escorts for vessels shipping Ukrainian grain through the Black Sea. Russia has effectively blockaded Ukrainian ports with its invasion, including a three-month siege of the largely-destroyed city of Mariupol, leaving the government in Kyiv struggling to export grain and sending prices to near-record highs.

The extended blockade is intensifying concern about the risk of a global food crisis on top of other cost-of-living challenges, including energy prices that are fanning inflation around the world.

“It could take weeks, not months, but if there will be no will of the Russians to open this window, it will be impossible,” Nauseda said in an interview Wednesday on the sidelines of the World Economic Forum in Davos, Switzerland. “The Russians could use this instrument as yet another leverage to destabilize the situation in the world. They are highly interested to do as much harm as possible.”

Another option, Nauseda said, is to reroute Ukrainian grain through other ports in the region by rail, though that channel would be daunting. An “experimental train” sent from Ukraine via Poland to the Lithuanian port of Klaipeda took three weeks, he said. Polish railroads are already overloaded and there are hurdles from bureaucratic regulations, including sanitation rules, he said.

“It may be possible to find some amendments, compromise with the Polish authorities,” Nauseda said. “It could be quite a realistic way to export through Poland and the Baltic countries.”

The task of sending rail shipments from Ukraine to Lithuania is complicated by the fact that Ukraine uses a wider track gauge than the European standard in Poland, which then needs to be switched back to the broader Soviet-era gauge at the Lithuanian border.

Russian Deputy Foreign Minister Andrey Rudenko said Moscow is ready for talks on grain shipments, Interfax reported. But he repeated Russia’s claim that Kyiv is to blame because it mined its ports. Ukraine says it is Moscow that is preventing ships from docking and accuses it of stealing grain stores from occupied regions.

Ukraine has traditionally shipped millions of tons of grains a year via the Black Sea, earning about 10% of its gross domestic product from the agriculture and food sector. It exported 1.1m tons of grain in April, according to its agriculture ministry, far below normal levels.

Estonian President Alar Karis is among those pushing for Europe to arrange Black Sea escorts.

“The UK and some others probably will join us, because it’s a humanitarian crisis which we are facing if the grain doesn’t get out of the country,” Karis said in an interview in Davos on Tuesday. A government spokesperson said the UK would work with other countries on resuming Ukrainian grain exports but “there are no current plans to deploy UK warships to the Black Sea.”

Nauseda would not comment on whether he was holding direct conversations with the UK on potential naval escorts, or with Turkey, which regulates maritime traffic through the Bosporus strait to the Black Sea.

“If NATO did not close the Ukrainian skies in the most tragic moments of the war, why should they dare to close the Ukrainian sea to allow the free passage of vessels with Ukrainian agricultural products,” he said at a breakfast organized by the Victor Pinchuk Foundation in Davos on Wednesday. “I would wholeheartedly welcome the decision, but I just don’t see the stamina and the bravery to take all the risks associated with this operation.”

The interruption of Ukraine’s agricultural cycle risks a multi-year global food crisis, Kuleba said, “but in the end the problem is that you cannot trust Russia even if they sign papers guaranteeing safe passage.”