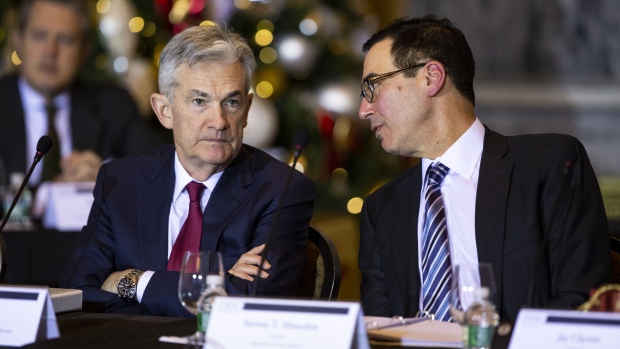 “Chair Powell and I have discussed this -- we both agree that in the near future, in the next five years, we see no need for the Fed to issue a digital currency,” Mnuchin said Thursday at a House Financial Services Committee hearing in Washington.

Some other central banks, including the People’s Bank of China, have discussed creating digital currencies. The European Central Bank is examining whether to develop its own digital currency if the private sector can’t make payments across borders faster and cheaper.

Mnuchin said he and Powell talk weekly, including at a meeting of the Financial Stability Oversight Committee on Wednesday, and had a conversation earlier Thursday on repo markets.

The Fed isn’t developing a digital currency but is studying the costs and benefits of such a move, Powell said in a letter to Representative French Hill, an Arkansas Republican. Hill wrote to Powell in September asking about the national security implications and possible benefits.

“We are carefully monitoring the activities of other central banks to identify potential benefits that may be relevant in the U.S. context,” Powell wrote in Nov. 19 letter.

Before developing a digital currency, the Fed would need to resolve operational risks such as possible cyberattacks, user transparency, monetary policy and financial stability, Powell wrote.

Mnuchin’s comment on digital currencies came in response to a lawmaker’s question that referred to a cryptocurrency under development by Facebook Inc. and China creating its own digital token.

Facebook surprised global regulators and policy makers earlier this year with its announcement that it would create a cryptocurrency called Libra. While the social networking company has explained that its digital coin could help financial systems open up to the world’s poor and underbanked, others have raised concern about its potential for being used by terrorists or other criminals.

“I’m fine if Facebook wants to create a digital currency, but they need to be fully compliant” with bank secrecy and anti-money laundering rules, Mnuchin said. “In no way can this be used for terrorist financing.”

Mnuchin said that he has had a dozen meetings with Facebook, going through regulatory concerns, which has slowed down the company’s progress.