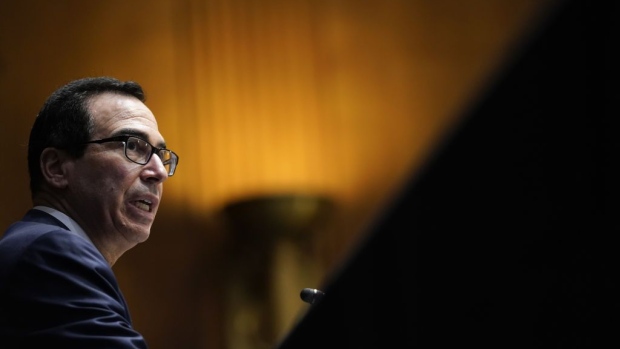 (Bloomberg) -- U.S. Treasury Secretary Steven Mnuchin is unlikely to release a much-watched report on international currency manipulation that was due in April until after presidential elections on Nov. 3, according to people familiar with the matter.

The semi-annual report to Congress has been largely written and ready for release since the spring. But Mnuchin’s focus on combating the economic collapse precipitated by the coronavirus pandemic was, at first, the reason it was delayed, the people said.

The Treasury has been prepared to issue its report since about July, the people said, but decided not to for reasons that remain unclear. The document provides assessments on whether China or other major trade partners are artificially adjusting the values of their currencies.

The second report of the year was due this month. A Treasury Department spokesperson declined to comment.

Switzerland and Vietnam are currently seen at risk to be designated as currency manipulators. Swiss central bank officials in the first half of this year ramped up interventions to curb a strong franc, which is seen as a haven currency. Meanwhile, the U.S. Commerce Department launched a Vietnam currency probe on allegations that the nation is manipulating the dong to hurt American businesses.

The Treasury Department releases a review of nine major trade partners to assess bilateral trade balances and other actions to judge whether they are manipulating their currencies. A designation comes with no immediate penalties but can rattle financial markets.