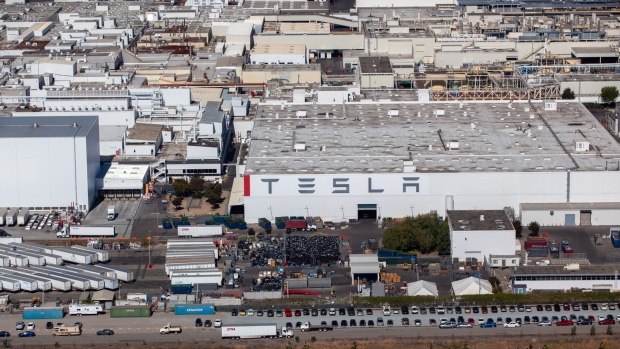 The U.S. Treasury Secretary and two of Elon Musk’s peers spoke out in support of Tesla Inc.’s bid to reopen its lone U.S. car plant, amping up the pressure on California officials who say it’s not safe yet.

“He’s one of the biggest employers and manufacturers in California,” Treasury Secretary Steven Mnuchin said Monday on CNBC. “California should prioritize doing whatever they need to do to solve those health issues so that he can open quickly and safely.”

“The auto plants should resume production appropriately and safely, and I include in that the Tesla plant in California, even though I don’t sell Teslas,” Jackson, a long-time Musk critic, said in an interview. “We need to start the journey on production now -- now is the moment.”

Taken together, the comments are indicative of the pressure state and local governments are feeling amid President Donald Trump’s inconsistent handling of reopening the economy. Even as COVID-19 cases climbed to multiply totals confirmed by other major countries, Trump pressured governors last month to “liberate” their states, then second-guessed leaders both for reopening too soon and too slowly.

Georgia’s Brian Kemp, for instance, was one of the Republican governors who was last to order citizens to shelter at home, then rushed to become one the first to lift them. After Kemp began relaxing social-distancing measures last month, Trump said he disagreed with what the governor was doing.

South Dakota’s Kristi Noem also signed on to a mayor’s effort to force the world’s biggest pork producer to shut its virus-stricken plant, only to then be overruled by Trump’s executive order to keep meat plants running.

Tesla shares pared a decline of as much as 4.2 per cent to trade down less than 1 per cent as of 2 p.m. Monday in New York. The stock has surged more than 90 per cent this year.

AutoNation isn’t the only company in corporate America jumping to Tesla’s defense. Lourenco Goncalves, the CEO of steel producer Cleveland-Cliffs Inc., said Monday there’s “a lot more ways to enforce social distance in a car manufacturer than anywhere else.”

“We are seeing Tesla in a big fight with California right now because of that,” Goncalves said on the company’s earnings call, noting that Michigan, Alabama, Tennessee and Texas aren’t standing in the way of auto production restarting in their states.

The support from AutoNation is surprising since Tesla has been on a years-long crusade to disrupt car dealers by waging state-by-state legal battles to sell its electric cars directly to consumers. Jackson, 71, has chided Tesla over the years for its production struggles and delivery delays, criticized the company’s valuation and questioned its progress on autonomous-driving technology.

But Jackson said it’s critical that auto factories reopen as soon as possible. Restarting production will be a “monumental challenge” given the need to navigate shutdown orders in various jurisdictions, including in Mexico. He declined to estimate when the industry will be back to full production.

“It’s going to be difficult, complicated, with fits and starts, twists and turns, and surprises,” he said.

Tesla released a 38-page “Return to Work Playbook” late Saturday laying out the safety protocols it will adopt at all of its facilities. While the company will disinfect work areas, enforce social-distancing precautions and provide personal-protective equipment, among other measures, the document doesn’t include any plans to test workers other than by checking their temperatures.

Alameda officials have said more testing needs to come online and that COVID-19 case counts need to drop before they’ll feel comfortable moving to the next phase of reopening.

Musk kept the pressure campaign going on Monday, by replying to a letter from the county judge in Texas where his rocket company, Space Exploration Technologies Corp., has built a launch site.

“Note is much appreciated,” Musk replied.

Note is much appreciated