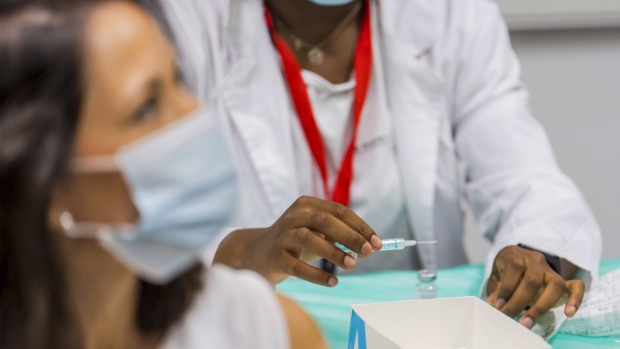 A health worker prepares a dose of the Moderna Inc. Covid-19 vaccine at the Banco Santander SA headquarters in Boadilla del Monte, Spain, on Tuesday, July 6, 2021. Santander signed a deal with the Madrid regional government for residents to get vaccinated at its HQ building outside the capital. Photographer: Angel Navarrete/Bloomberg , Bloomberg

Moderna Inc. President Stephen Hoge said there’s a clear risk that existing Covid-19 vaccines will be less effective against the omicron variant, though it’s too early to say by how much.

An updated formulation would be probably be needed if effectiveness is shown to drop by something like half, Hoge said on ABC’s “This Week” on Sunday.

“I think that there’s a real risk that we’re going to see a decrease in the effectiveness of the vaccines,” Hoge said. “What I don’t know is how substantial that is.”

“Are we going to see something more like a 50% decrease in efficacy, which would really mean we’d probably need to reboot the vaccines and update them?”

Financial markets were spooked last week when Moderna Inc.’s top executives said the omicron variant’s many mutations suggest new vaccines will be needed. Chief Executive Officer Stephane Bancel told the Financial Times he thinks “there is no world” in which existing shots will be as effective as against the delta variant.

Hoge said he “probably would have used different words, but I think the short answer is we don’t have data yet to know for sure.”