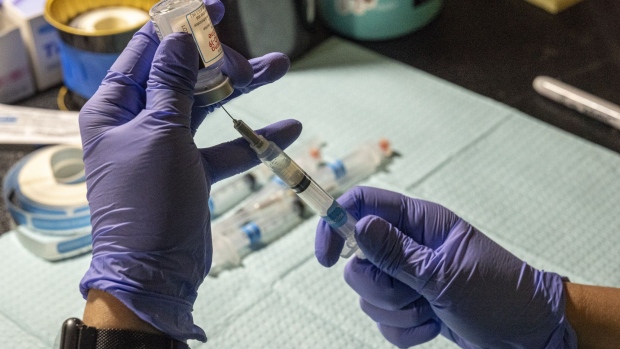 A healthcare worker wearing protective gloves fills a syringe with a dose of the Moderna Inc. Covid-19 vaccine at a vaccination site in Richmond, California, U.S., on Thursday, April 15, 2021. The California Department of Public Health has opened Covid-19 vaccination eligibility to persons 16 and older. , Bloomberg

(Bloomberg) -- Moderna Inc.’s omicron-targeting vaccine triggered the production of antibodies against the strains’ newest variants, though the immune response was less robust than seen with the original version that emerged late last year.

Everyone given Moderna’s lead omicron immunization generated neutralizing antibodies against BA.4 and BA.5 in the latest trial involving about 800 people, the Cambridge, Massachusetts-based company said in a statement. However, the level of antibodies induced against the newer strains was lower than the shot produced against the original version of omicron.

As the coronavirus continues to mutate, medical experts are trying to decide when and how to modify vaccines to fight emerging and future variants. Moderna’s lead candidate to replace its existing Covid inoculation combines parts of its original shot with elements that specifically target omicron. The results are encouraging, officials said.

“The antibody levels are still extremely high,” and should be enough to provide good protection against newer variants, Paul Burton, Moderna’s chief medical officer, said in an interview. “It is really reassuring.”

Moderna fell 1.5% in trading before US markets opened.

The results will be submitted urgently to regulators, Chief Executive Officer Stephane Bancel said in the statement. The company is preparing to supply the next-generation bivalent booster shot starting in August, he said.

Earlier this month, Moderna reported data from the same trial showing the bivalent vaccine generated a superior immune response against the original omicron strain. In the new data, the company evaluated how it stacked up against the the BA.4 and BA.5 variants that account for a rising share of US cases.

Neutralizing antibodies against BA.4 and BA.5 “were approximately 3-fold lower” than those against the original omicron strain, the company said.

Rival vaccine manufacturers Pfizer Inc. and BioNTech SE are expected to have data soon from the omicron-specific booster shots they are developing together.

On June 28, advisers to the Food and Drug Administration will meet to discuss whether future Covid immunizations should be modified to account for changing variants, and if so, which strains should be included for the fall when cases may rise with cooler weather.

BA.4 and BA.5 accounted for about 35% of US cases in mid-June, up from around 9% of cases at the end of May, according to U.S. government estimates.