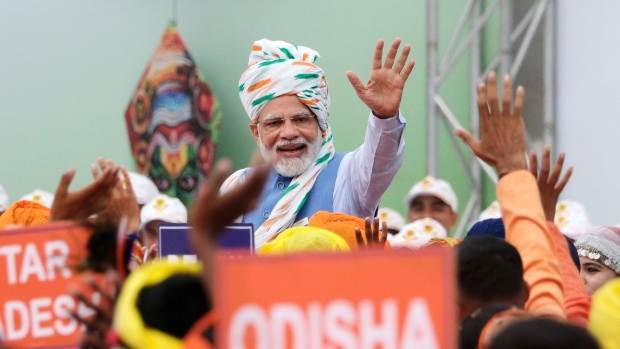 Narendra Modi, India's prime minister, meets the students from various states of India at the nation's Independence Day ceremony at Red Fort in New Delhi, India, on Monday, Aug. 15, 2022. After more than eight years in office, Modi's personal standing towers over his political rivals even as the South Asian nation grapples with high inflation and unemployment and faced a catastrophic Covid-19 wave last summer. , Bloomberg

The opposition will focus on economic issues including soaring joblessness, said the All India Trinamool Congress leader, whose party rules the West Bengal state.

“If the government doesn’t do enough to improve the economy it will get into trouble sooner or later,” O’Brien told Bloomberg Television in an interview Friday. “So I think we have match on in 2024 when the general elections come up in India.”

While Modi’s Bharatiya Janata Party is widely expected to retain power in the next general elections, opposition leaders will battle the government across states, O’Brien said. Asia’s third-largest economy continues to fight high inflation and unemployment.

O’Brien said his party chief and West Bengal chief Minister Mamata Banerjee and the leaders of other opposition-ruled states like southern Tamil Nadu and Telangana, will be among those who take on Modi and the BJP in the next elections. O’Brien’s party is the fourth-largest in the Indian Parliament, with 23 elected representatives.

Earlier this month Modi’s ruling coalition lost a key political ally, and was ousted from power in the eastern state of Bihar. Modi’s alliance is likely to win a smaller parliamentary majority in 2024, a new survey shows, but he remains by far the most popular choice to lead the country.