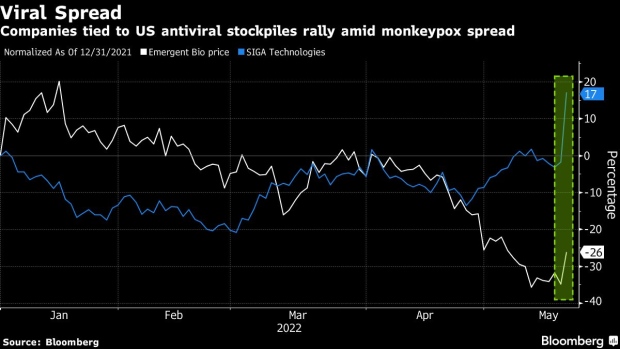 (Bloomberg) -- Shares of companies that develop or manufacture therapies to combat viral outbreaks, such as SIGA Technologies Inc. and Emergent BioSolutions Inc., are rallying Thursday as the first case of monkeypox arrives in the US this year and new cases appear in the UK.

SIGA, a biological warfare defense firm, soared as much 23%, its biggest intraday jump since 2016 when fears of Zika contagion were roiling the market. The company won US regulatory approval for the intravenous form of its smallpox pill today. The treatment, dubbed Tpoxx, is approved in Europe for use in monkey pox and was cited in a recent budget request to treat a US patient with the disease, the company said in a statement.

Contract manufacturer Emergent, which is facing a Congressional probe over quality control issues in its production of Covid-19 vaccines, rallied as much as 18%, its biggest one-day jump since March 2020. SIGA and Emergent may be familiar names to investors as they made big moves amid past potential pandemic threats like Zika and Ebola in 2014, as well as at the start of the Covid-19 epidemic.

Chimerix Inc., another antiviral drug developer, climbs 14%, while Inovio -- which was developing a Covid-19 vaccine before the US government pulled funding last year -- rises 18%.

The rare and potentially dangerous monkeypox has been confirmed in the US in a man who had recently traveled to Canada, with two news cases appearing in the UK, bringing the total number there to nine. It follows reports of scattered cases in Europe.