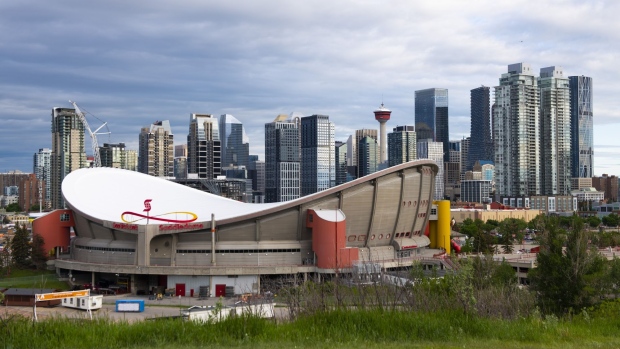 The Scotiabank Saddledome in front of downtown Calgary, Alberta, Canada, on Monday, June 20, 2022. Calgary, surrounded by fields of oil, natural gas, wheat and barley that make Canada a global exporting powerhouse, is at the epicenter of a post-Covid economic expansion. Photographer: Gavin Bryan John/Bloomberg , Bloomberg

NE2 Group, a brokerage that has historically played an important role in setting prices for Canadian crude, lost Houston-based Mikaela Bennett and Madison Brittner since the weekend, according to people familiar with the matter. The departures come after two-thirds of the firm’s brokers resigned around the Easter holiday weekend over allegations that NE2’s president and owner, Timothy Gunn, was physically and verbally abusive to employees.

The first round of walkouts had a chilling effect on Canada’s oil market. NE2’s brokers typically handle enough volume to determine the benchmark prices of several Canadian crude grades, with those prices underpinning a key futures contract.

In the days after the resignations, traders began exiting at least one contract used to hedge heavy crude on concerns that the firm didn’t have the staffing to ensure accurate prices. Since April, open interest on the Western Canadian Select Oil (NE2) Monthly Index Futures has fallen by 73%.