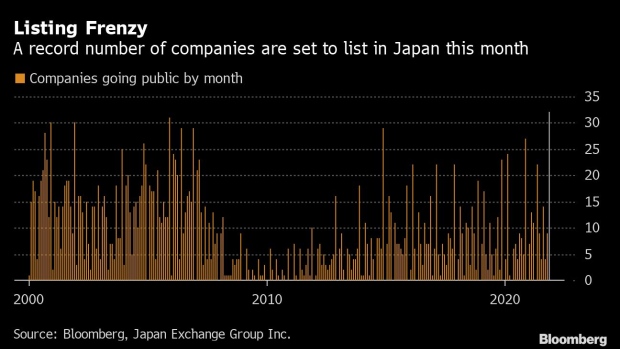 (Bloomberg) -- While Japan’s stock market might have had an unassuming year overall, one sector is running red-hot: new listings.

December is set to see the most companies list in a single month in Japan, with a total of 32 firms due to go public before the end of the year, according to data compiled by Bloomberg. That would top the 31 firms that went to market in December 2005.

While a rush by companies to file listing applications by year’s end has been a factor, the 2021 figure has also been buoyed by growth in the number of IT startups. Ventures had also delayed listings during the pandemic, with new coronavirus cases in the country now near their lowest since the pandemic began. Nomura Corp. -- no relation to Japan’s largest brokerage -- a more than 60-year-old maker of packaging for the food industry, kicked off proceedings in December. The shares fell nearly 20% on their debut Thursday.

Investors in the likes of Lovable Marketing Group Inc., Institution for a Global Society Corp., ExaWizards Inc. and Croooober Co., all of which are set to list before the end of the year, will hope for a better performance. Almost all the companies will debut on the Mothers market for startups and smaller firms. That index is down 14% in 2021, having surged during the pandemic in 2020.

2021 as a whole is set to see the most listings in 15 years in Japan. Yet changes are likely to be on the way: new Prime Minister Fumio Kishida has highlighted Japan’s startup scene as an area in need of support, and has called for a rethink of the listing process, though he has been vague on details.

Kishida’s panel on “new capitalism” has also raised the issue of Japan’s lack of unicorns -- private firms valued at over $1 billion -- compared to the U.S. and Europe. It also noted the average age of Japan’s largest firms, many of which were formed in the years after World War II such as Sony Group Corp. and Honda Motor Co., compared to more recent giants like Amazon.com Inc.

Another common complaint in Japan’s startup scene is the tendency for firms to list too early. While December is set to be a record month, the total amount raised by companies that have listed or priced this year is at 548 billion yen ($4.8 billion). That’s far from the 3 trillion yen raised in 2018, a number inflated by SoftBank Group Corp. spinning out its mobile unit SoftBank Corp.

Read more: Japan to Review IPO Pricing Amid Criticism ‘Pops’ Are Too Big

Kishida has also called for special purpose acquisition companies to be allowed, and complained that initial public offering prices are being set too low and depriving entrepreneurs of funds. Japan Exchange Group Inc. will also replace the Mothers and Jasdaq markets with a Growth section in April, as part of its market segment reform.