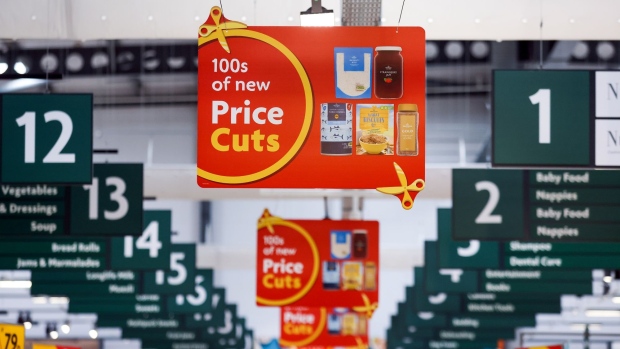 (Bloomberg) -- The battle for Wm Morrison Supermarkets Plc could be resolved in just over three weeks after the grocer set a deadline for shareholders to vote on a proposed 6.3 billion-pound ($8.6 billion) takeover by Fortress Investment Group.

Britain’s fourth-largest grocer published offer documents on Thursday listing Aug. 16 as the day shareholders will decide the outcome of what could be the country’s largest take-private deal in a decade. A vote of 75% or more is required for the deal to go through.

Under British takeover rules Clayton Dubilier & Rice LLC, a potential rival to Fortress, now has until Aug. 9 to decide whether to make a rival offer setting the scene for a potentially heated few weeks while the future of Morrison is decided.

Fortress is leading a group of investors that include America’s billionaire Koch family and the Toronto-based Canada Pension Plan Investment Board in its pursuit of Morrison. Apollo Global Management Inc. said this week it’s considering joining the Fortress consortium and will not make a separate bid for the grocer.

The group offered 254 pence a share, including a dividend, for Morrison and made a series of promises on pay and pensions. It also pledged not to carry out a material sale and leaseback of the grocer’s real estate portfolio. The Fortress offer topped a 230 pence-a-share offer from CD&R, which was rejected by Morrison.

Morrison shares traded at 265.1 pence at 10:02 a.m. in London, well above the latest offer. One large shareholder, J O Hambro Capital Management Ltd., has already said it believes any offer should be closer to 270 pence a share to merit engagement and consideration.

CD&R has been granted access to confidential information at Morrison as it works on an improved offer, people familiar with the matter said July 9. There is no breakup fee tied to the Fortress offer, so Morrison can accept a rival proposal.

Morrison is attracting takeover interest as it has a large real estate portfolio, owning about 90% of its almost 500 stores. The business, whose turnaround has been led by Chief Executive Officer Dave Potts, generates large amounts of cash and its finances are solid with low underlying debt and a pension surplus. The fortunes of leading supermarket chains have also improved after lockdowns triggered a surge in grocery spending.

Fortress will provide 1.75 billion pounds of equity to help finance the deal, CPP Investment will inject 995 million pounds and the real estate arm of Koch Industries will provide 500 million pounds, according to the offer document. HSBC Holdings Plc and Royal Bank of Canada are advising the group and also providing debt funding.

Completion of the deal would result in a windfall for the banks and advisers. Fortress expects to incur fees of about 264 million pounds, including financing arrangements. Morrison will pay around 50 million pounds, mostly to financial adviser Rothschild & Co.