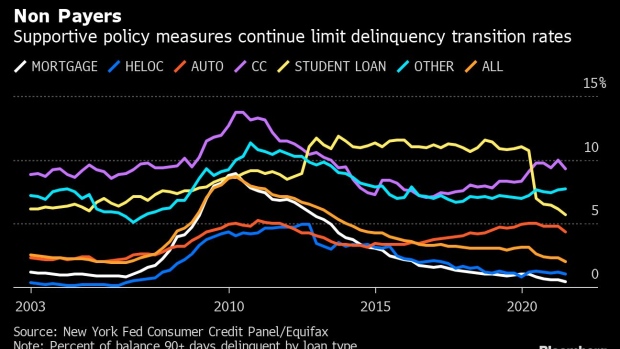 (Bloomberg) -- U.S. household debt rose at the fastest pace since 2013 in the second quarter, driven by a mortgage boom as Americans took advantage of low borrowing costs and sought more space to work from home.

Household liabilities climbed $313 billion to $14.96 trillion as of the end of June, a 2.1% rise from three months earlier, the Federal Reserve Bank of New York said in a report published Tuesday.

Most of the increase came in mortgage balances. With the average 30-year rate declining in the period, millions of Americans with good credit took the opportunity to refinance and cut their monthly payments. Some 44% of the country’s entire $10.4 trillion stock of mortgages was originated in the 12 months through June, according to the New York Fed.

“We have seen a very robust pace of originations over the last four quarters, with new extensions of credit for mortgages and auto loans combined with rebounding demand for credit-card borrowing,” said Joelle Scally of the Center for Microeconomic Data at the New York Fed.

The U.S. housing market has been so hot that many homeowners have higher levels of equity even though they’ve borrowed more. Home prices jumped 10.5% in the first half of 2021, according to Fannie Mae, the fastest pace on record. U.S. homeowners withdrew about $50 billion in home equity in the first quarter, the most in more than a dozen years.

Still, the opportunity hasn’t been available to everyone. Mortgage credit availability is down sharply since early 2020 when the pandemic was declared a national emergency, according to the Mortgage Bankers Association. More than 71% of mortgage originations in the second quarter were among borrowers with a credit score of at least 760, just shy of the 73% record in the previous three months.

For other types of credit, like auto loans and credit cards, lending standards have been loosening, according to the Fed’s July Senior Loan Officer Opinion Survey released on Monday.

Overall, household debt levels -- measured as a share of the economy -- remain well below the highs posted in the years leading up 2008 financial crisis. And some kinds of borrowing are still short of pre-pandemic levels in dollar terms.

Credit-card balances, while they rose by $17 billion in the second quarter as the consumer economy rebounded, are about $140 billion lower than at the end of 2019.

Pandemic policies -- from one-time checks and extra unemployment benefits to loan forbearance programs -- have helped Americans stay current on their debt, with delinquencies falling in most categories of borrowing.

The biggest shift has been in student debt. About 5.7% of college loans were 90-plus days delinquent or in default at the end of June, compared with more than 11% before the pandemic.

New York Fed officials said that delinquencies might start to increase as the Covid policies expire. The freeze on student-loan repayments, for example, is due to end on Sept. 30.