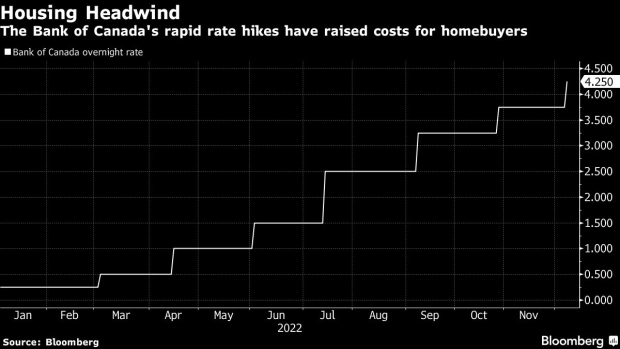 (Bloomberg) -- The Bank of Canada’s most recent rate hike may force homebuyers to prove they can pay mortgages with interest rates above 8%, another headwind for the country’s cooling housing market.

Canadian regulators require that buyers pass a “stress test” showing that they can afford mortgages with rates that are two percentage points higher than lenders are offering. Major banks’ variable mortgage rates are close to their prime lending rates, which in turn are 2.2 points above the Bank of Canada’s overnight rate.

The central bank raised its key rate to 4.25% on Wednesday as it continues its campaign to quell inflation. That will push the commercial-bank prime rate to 6.45% — about double where it was in April.

Currently, major banks such as Royal Bank of Canada and Toronto-Dominion Bank have posted mortgage rates slightly below prime — though top customers may be given bigger discounts. In other words, advertised variable mortgage rates are likely to move to the low 6% range, pushing the stress-test rate to more than 8%.

Consumers may be able to get a slightly lower rate if they agree to lock in for five years. RBC’s current five-year fixed mortgage is at 5.7% and tends to track the yield on benchmark government bonds, not the Bank of Canada policy rate.

Home prices in Canada already have fallen 10% from their February peak, with previously hot markets including Toronto and its surrounding area posting steeper declines. The number of sales has plummeted even more, as sellers cling to hopes that prices will rebound — or remain hesitant to move and take on new mortgages at today’s higher rates.