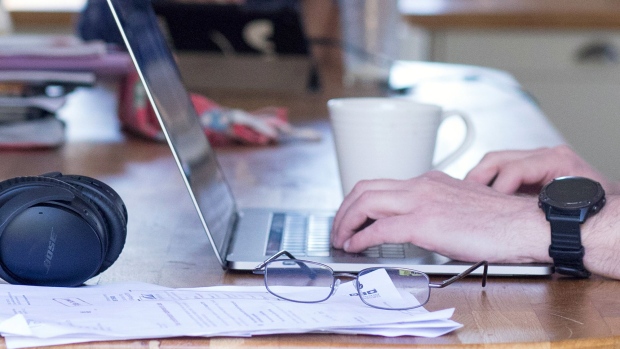 A worker works on his laptop in his kitchen whilst working from home in Danbury, U.K., on Tuesday, April 7 , Photographer: Bloomberg/Bloomberg

Mo Yazdani left his downtown Toronto apartment for his parents' house in Ottawa midway through April.

After spending the first few weeks of lockdown in a cramped space, unable to see any friends, the solitude began to wear on him. "As an extrovert, I just wanted to be around someone, and have more space, maybe go cycling and running," Yazdani says. So, he bought a train ticket, packed a bag, and went home.

The product owner at a Toronto-based tech company says he feels like there's not much he's missed in Toronto in the few months since he left. In fact, many of his friends scattered around the same time he did. "There's been a bit of an exodus from Toronto," he says. "People definitely want more freedom than they would before."

Yazdani and his peers are among countless young Canadians to flee major metropolitan areas during lockdown in search of space, proximity to family or distance from COVID-19 hotspots.

But as social distancing orders carry on in cities across the country, and a growing number of workplaces shift toward remote models, many millennials are left weighing their options about moving back.

Yazdani, for example, has heard rumours his office remaining closed until September, while tech companies have already made the call to stay closed until the end of 2020, or in some cases, indefinitely.

He still pays rent on his Toronto apartment, but is in talks with his landlord to end his lease in favour of living with his parents and two siblings rent-free.

The downsides to living at home are few, Yazdani says. He's given up what personal space he had before in exchange for daily family time and ample greenery. If given the choice to stay longer, he hopes to take up winter sports that would otherwise be difficult to do from Toronto. Life in lockdown with parents, as it turns out, is pretty good.

But Yazdani admits the shift has had little effect on his wallet, at least in the short term. His biggest financial burden is the rent on his Toronto townhouse, and he also regularly buys groceries and other goods to help chip in around the house.

While all of this adds up to less than he was spending pre-pandemic, when the option to dine out was still on the table, Yazdani says the difference in daily expenses between living alone in Toronto and living with family in Ottawa is a minor one.

Navarre Hebb, who got stuck at his parents' house in rural Nova Scotia after an ill-timed visit from Toronto in March, has saved a bit more in his new living situation.

"I basically don't buy anything other than, like, I'm still paying for my rent and internet back at my place," Hebb says. But he remains uncertain about what to do with his apartment, which has become a $2,000-monthly money pit. The data scientist says the bank he works at has yet to make any definitive orders for his return to Toronto, and with his lease expiring in September, the decision not to renew it is growing more appealing by the day.

He's also found the hour time difference to be advantageous: Hebb says his mornings are more leisurely with an extra hour to spare before his colleagues in Toronto log on.

As workplaces like Hebb's and Yazdani's master remote communication with ease, the importance of proximity to commercial hotspots like Toronto is increasingly being called into question.

In fact, Yazdani predicts that as non-essential workplaces increase the number of remote positions on staff or opt to continue remotely in entirety, the job market will shift on a national scale.

If achieving career success no longer requires living in overpriced urban hubs like Toronto, New York, or London, barriers to access for high-level work positions in white-collar offices could come falling down.

"I think job opportunities are going to be a lot more merit-based," Yazdani says. "And I think it's going to be good for Canada, which has a very concentrated job market."

The professional appeal of these cities is already beginning to dwindle, he adds. "Networking events have gone online, and I guess the reason why we were in Toronto is kind of diminished right now," Yazdani says. "It's all virtual, so we can still reap the benefits ... in Ottawa or Winnipeg or somewhere else."

Though long-term change in the country's job market has yet to play out, Yazdani says being able to permanently work remotely from a more affordable town, with budget left over to buy vacation property abroad, would align more closely with his goals.

"To have something in Lisbon or a small town in Spain, I think that kind of lifestyle is more appealing to me than living in a shoe box in a very large city like Toronto," Yazdani says.