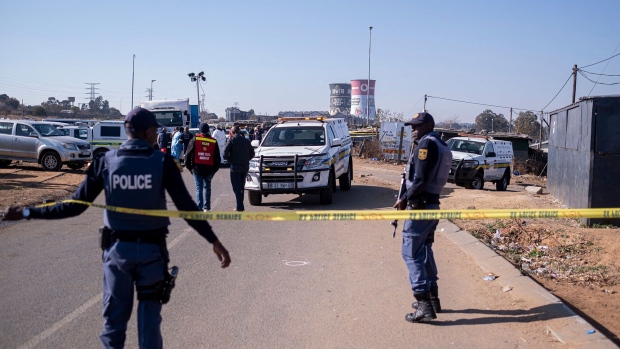 (Bloomberg) -- Surging rates of murder, extortion and kidnapping are among signs that crime is posing an “existential” threat to South Africa, according to a report by the Global Initiative Against Transnational Organized Crime.

The murder rate has risen 38% since 2010, the number of kidnappings for ransom has quadrupled, and there is a 187 billion rand ($10.6 billion) annual impact from infrastructure theft such as the looting of copper-power cables, the Geneva-based group said in a report released on Wednesday. All of these are signs that the state is struggling to contain criminal activity, it said.

“Organized crime is an existential threat to South Africa’s democratic institutions, economy and people,” Mark Shaw, the director of the group, said in an introduction to the 206-page document. “It often lies behind and connects numerous seemingly disparate criminal incidents we see occurring in South Africa every day.”

GI-TOC, as the group is known, places the blame on the country’s apartheid history, which has resulted in poorer, formerly non-White areas being neglected by the state. That’s been exacerbated by the weakening of state institutions during the nine-year rule of former President Jacob Zuma, who was ousted by his party in 2018.

While Zuma has denied wrongdoing, the current administration has said at least 500 billion rand was stolen during his rule. State corruption became entrenched and public procurement budgets were looted.

Zuma’s rule was “one driven by personality and personal interests,” GI-TOC said. This resulted in political appointees to key positions at state companies, resulting in “patronage networks, which in turn helped facilitate grand-scale corruption and enabled business and organized crime to secure an unprecedented foothold in the state apparatus.”

Organized crime in South Africa ranges from heroin, meth and cocaine trafficking to people-smuggling, rhino poaching and the stripping of metal from state power, water and transport companies. Pipelines are targeted and syndicates demand contracts from mining and construction companies, which they are paid for but don’t fulfill.

Other issues include a surge in vigilante killings and a jump in cash-in-transit robberies. Cybercrime is also on the rise, with South Africa becoming the biggest location of internet-protocol addresses used for digital extortion in Africa. Gold and platinum are illegally mined or stolen and sold illicitly.

The murder rate is currently more than 40 per 100,000 citizens and over 10,000 people were kidnapped for ransom in the most recent year assessed, GI-TOC said, citing government data.

“South Africa faces a complex, hybrid criminal threat. Having originated in highly constricted conditions under apartheid, in three decades organized crime has spread across the country and forged links across the world,” the group said.