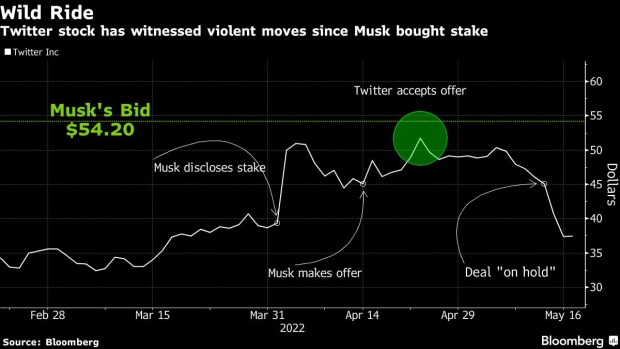 (Bloomberg) -- Elon Musk’s takeover of Twitter Inc. has become a big question after a series of mixed messages from the billionaire. But despite the stock’s wild swings, merger experts still expect the deal to go through -- as long as the price comes down.

In a survey of investors and merger specialists conducted by Bloomberg News on Monday and Tuesday, 11 of 14 respondents said they expect the sale to go through at a discount to Musk’s original $54.20 offer.

Twitter shares have been on a wild ride since early April, when the Tesla Inc. chief executive disclosed his purchase of a stake in the social-media company. The stock rose as high as $52.29 in the days after Musk’s bid on April 14, only to sink as questions swirled about his ability -- and commitment -- to complete the deal.

The shares plunged on Friday when Musk tweeted that the acquisition was “temporarily on hold” as he seeks more information on the number of fake accounts on the platform.

Although Musk later maintained that he is “still committed” to the purchase, Twitter fell further on Monday, marking the widest spread to the offer price since the deal was announced. The shares see-sawed on Tuesday after Musk said Twitter must prove the spam proportion on its platform for the deal to go through.

“Twitter is not trading completely like a broken deal, but awfully close to one,” said Steve Sosnick, chief strategist at Interactive Brokers. “I would say that if trading was truly implying a broken deal — as opposed to there being some hope for a renegotiation — that it would be even lower than it is now.”

If the deal falls through, Twitter is likely to trade at $30.86 a share, according to the average of estimates from survey respondents. That’s 17% below Monday’s closing price.

Based on the acquisition’s proposed valuation, the market is pricing in a roughly 28% probability of the deal being completed. However, that calculation is complicated by expectations that Musk will get it done at a lower price, arbitrage traders said.

Musk’s complaints about lack of transparency on spam accounts is an indication that the billionaire is getting “cold feet,” though no other bidder is likely to emerge if Musk were to walk away, according to Wedbush analyst Daniel Ives.

Fake accounts “are not a new issue and likely more of a scapegoat to push for a lower price,” he said.

Musk raised the idea of renegotiating the deal at a conference in Miami on Monday, but he may not have much leverage under the current agreement, according to Brian Quinn, an associate professor at Boston College Law School who specializes in corporate mergers.

“The seller has an extremely strong position to negotiate or not negotiate if they don’t want that,” he said in an interview.