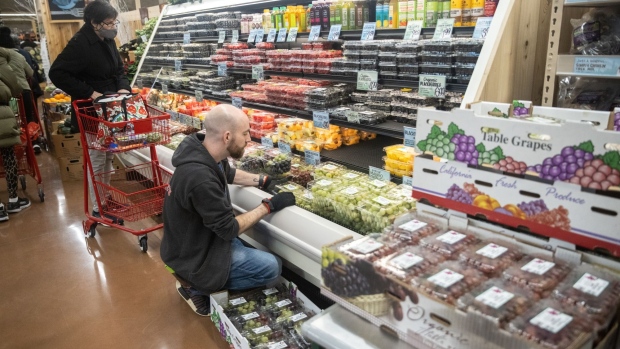 An employee restocks shelves with cases of grapes at the Trader Joe's Upper East Side Bridgemarket grocery store in New York, U.S., on Thursday, Dec. 2, 2021. The century-old vaulted market under the Queensboro Bridge has reopened on Thursday as a Trader Joe's. Photographer: Jeenah Moon/Bloomberg , Bloomberg

Forecasters project slower US economic growth and faster inflation at year-end, a survey of economists by the National Association for Business Economics showed Monday.

Compared to a year earlier, inflation-adjusted gross domestic product is now forecast to be up 1.8% in the final three months of the year. That’s weaker than the 2.9% estimate seen in the February survey. Conversely, economists bumped up expectations for both the consumer price index and the Federal Reserve’s preferred gauge -- the personal consumption expenditures price index.

Inflation is hovering near a four-decade high, and the central bank, which raised interest rates by the most since 2000 earlier this month, is aggressively tightening policy to tamp it down. The Fed faces a difficult challenge of slowing the economy enough to get inflation under control but not so much as to tip it into recession. Economists have become increasingly pessimistic though, with recession odds creeping up.

Some 40% of panelists said monetary policy missteps are the greatest downside risk to the US economy through 2022.

The consumer price index is projected to rise 5.6% year-over-year in the fourth quarter, two percentage points higher than the forecast in the group’s previous survey.

The PCE price index is forecast to climb 4.8%, more than double the Fed’s target and up from 3.2% in the previous survey. Excluding food and energy, expectations for the PCE price index at year end moved up a full percentage point to 4.2%.

Amid a tight labor market, the panelists see hourly compensation rising 5.4% this year, up slightly from the 5.3% increase predicted in the February survey. The latest survey of 53 NABE members was conducted May 2-10.