The selloff in technology companies most sensitive to higher rates resumed Thursday, sending the Nasdaq 100 to its lowest level since October as a raft of Federal Reserve officials signaled their intention to combat inflation aggressively. Treasuries rose after last week’s violent rout.

Traders also assessed news that a divided Supreme Court blocked the centerpiece of President Joe Biden’s push to get more people vaccinated, rejecting a rule that would have required 80 million workers to get shots or periodic tests. The Nasdaq 100 sank more than 2.5 per cent, trading below its average price of the past 100 days. Chipmakers erased gains that were earlier driven by Taiwan Semiconductor Manufacturing Co.’s growth projections. Boeing Co. rallied as Bloomberg News reported the 737 Max is set to resume commercial flights in China as soon as this month.

Fed Governor Lael Brainard said officials could boost rates as early as March to ensure that generation-high price pressures are brought under control. Fed Bank of Philadelphia President Patrick Harker favors a March liftoff and three or four hikes for 2022. His Chicago counterpart Charles Evans -- who sees a similar number of increases this year -- said he couldn’t judge the likelihood of the first raise taking place in two months’ time. Richmond Fed President Thomas Barkin said officials will be in a position to start normalizing rates at their March meeting should circumstances support that.

“We are in a position where much that has been positive for equities is maybe moving to neutral or negative, and while there are still few alternatives, it makes the equity market ripe for more fluctuations over the next few months as we see how the data shake out and how the Fed reacts,” said Sarah Hunt, portfolio manager at Alpine Woods Capital Investors. 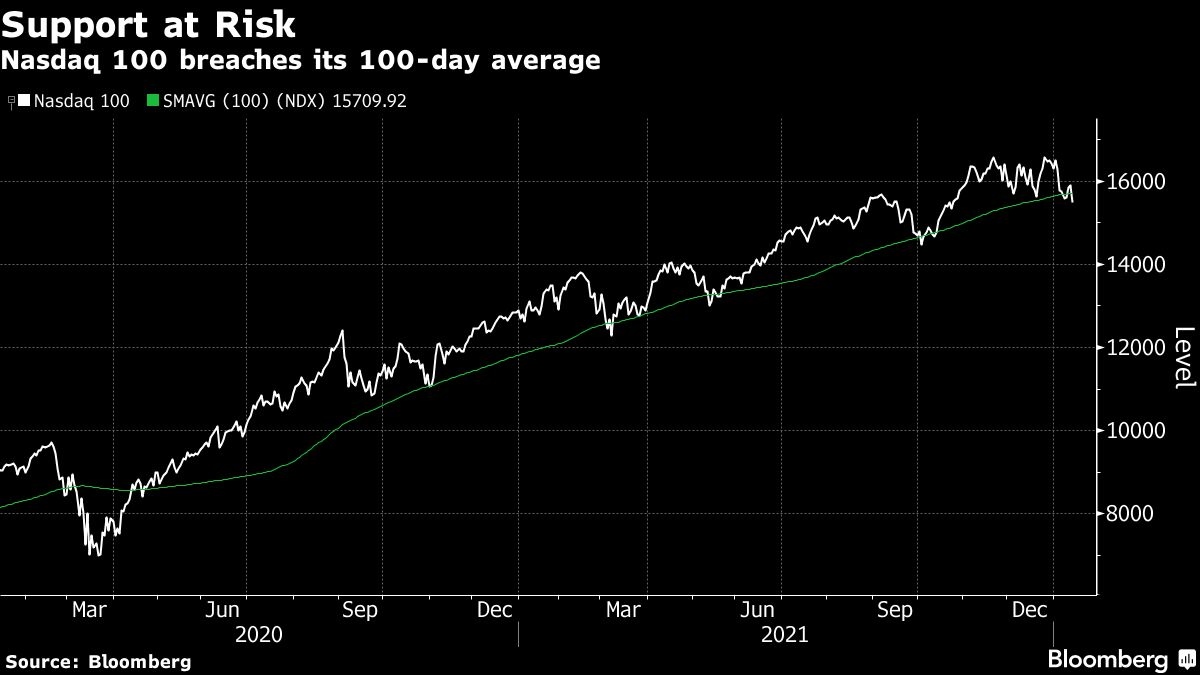 Rising rates -- an upshot of strong economic growth -- could drive investors toward value stocks, which tend to be more cyclical and offer near-term cash flows. That leaves growth shares wanting for buyers. The long-term earnings potential of the relatively expensive technology companies could become less appealing amid elevated inflation.

“Tech is the classic example of an area where stocks have really benefited from the decline in rates,” said Kara Murphy, chief investment officer of Kestra Investment Management. “As expectations rise for rates going forward, then it makes sense that would be the area that would get hurt more.”

Prices paid to U.S. producers decelerated in December as two key drivers of inflation in 2021 -- food and energy -- declined from a month earlier, representing a respite in the recent trend of sizable increases. At the same time, producers continued to face a variety of materials shortages, limited labor supply and transportation bottlenecks that sent prices soaring last year.

Morgan Stanley clients expect financial stocks to outperform this year, according to a survey at its annual conference this week. The poll shows that 45 per cent of respondents bet the industry will be the best performer in 2022. That’s the highest share of the votes for the sector since 2015, the firm said in a note Thursday.