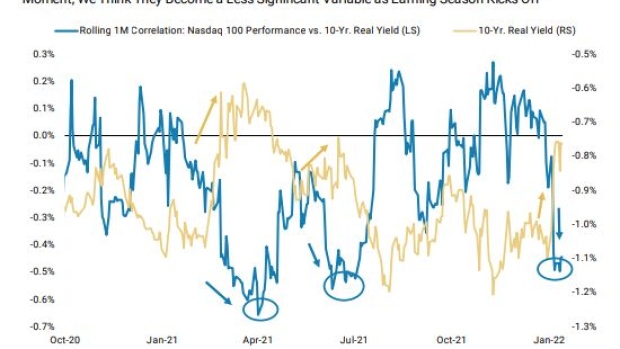 (Bloomberg) -- Rising yields and anxiety earnings growth is poised to slow dealt another gut punch to tech stocks, pushing the Nasdaq Composite Index to the brink of a correction.

The tech-heavy index slumped 2.6% Tuesday, taking its drop from the November 19 record to 9.7%. The two-month drought without a record is the longest since April 2021. Along the way, the gauge surrendered a key technical level, the average price over the past 200 days, for the first time since the aftermath of the pandemic bear market in 2020.

While the Nasdaq has suffered worse drawdowns than this in the past two years, what sets it apart is duration. At 60 days, it’s already more than twice as long as the two previous corrections. Unlike those retrenchments where dip buyers quickly flooded in, this time, investors are reluctant to return amid speculation that the Federal Reserve will have to raise interest rates sooner to battle inflation.

“The hot wage numbers out of the banks have the market even more worried about inflation, and thus the likely path of Fed tightening,” said Steve Chiavarone, portfolio manager and head of multi-asset solutions at Federated Hermes. “Tech needs inflation to ease and the Fed to be able to move at a slower pace. Otherwise, growth could be under pressure. This has been our call.”

The drag from bond yields can be illustrated by their relationship to the Nasdaq 100, a measure that tracks tech heavyweights. By the count of Morgan Stanley strategists led by Mike Wilson, the one-month correlation between the equity gauge and changes in the 10-year real yield was negative 0.5, one of the lowest readings in the post-pandemic era.

What could potentially break the elevated linkage is the reporting season that just got underway, though in that regard, the earnings momentum is not helping the Nasdaq, either. As the economic recovery broadens, the growth edge that tech firms once enjoyed is diminishing.

“You could say that growthy tech stocks on the Nasdaq have been like the cool kid that gets to break all the rules and nobody minds, but Principal Powell is finally ready to put him in detention,” said Max Gokhman, chief investment officer at AlphaTrAI. “Meanwhile, the boring kid everybody keeps writing off, aka value, has been quietly getting stronger and now investors realize his steady cash flows and stable growth rates can be relied on, unlike Nasdaq’s bombastic promises.”

Leading Tuesday’s slump were again those software and internet companies that have yet to make any money. A Morgan Stanley basket of profitless tech firms tumbled 4.2%, extending its loss from a November peak to more than 40%.

While volatility isn’t yet at the November highs, the CBOE NDX Volatility Index just closed above 25 for two straight weeks, a streak that was seen only one other time in the past nine months.

Such turmoil is putting off investors who are increasingly shunning risk. Based on factor performance tracked by Bloomberg, volatility is the worst-performing this year, with a strategy of buying the most-volatile stocks against those most dormant sinking more than 9%.

From long-only funds to speculative investors, everyone is suddenly exiting tech stocks. In Bank of America Corp.’s latest survey of global fund managers, net allocation to the technology sector fell to the lowest level since the 2008 global financial crisis.

Past support that has reliably lured buyers stopped working. The Nasdaq Composite just ended a 439-day streak above its 200-day average, the third-longest run on record.

As low as real yields are, a case could be made that tech stocks tracked by the Nasdaq 100 had shot up too much relative to their levels, according to Steve Sosnick, chief strategist at Interactive Brokers LLC. In other words, the momentum of tech stocks had run so far ahead what could be justified by low rates that further pains may lie ahead even if bond market stabilizes, he said.

“That implied that NDX was vulnerable even if rates were stagnant, and even more so if real rates became less negative,” he said in an interview. “And real rates are less negative today than they were on Friday.”