Nestle SA is planning to enter the cultured-meat market in a move that could see the world’s largest food company help deliver the nascent technology faster to the mass market.

The Swiss giant has been working on alternative meat products that would blend cultivated meat with plant-based ingredients, according to people familiar with the deliberations, who asked not to be named because the information hasn’t been made public. The meat is being developed with Israeli cell-based startup Future Meat Technologies Ltd., the people said.

Nestle’s Chief Executive Officer Mark Schneider is pressing ahead with an alternative protein strategy as environmental and health concerns drive more consumers to opt out of conventional animal products. The early move, after a relatively late decision to enter the craze for plant-based products, would help Nestle gain a foothold in an industry that may reach 35 per cent of the US$1.8-trillion meat market by 2040, according to analysts at Kearney, a consultancy.

A representative for Future Meat Technologies didn’t respond to an email seeking comment. Nestle confirmed in a statement Tuesday that it’s working with the company as it evaluates “innovative technologies to produce cultured meat or cultured-meat ingredients with several external partners and startups.”

The timing of a potential market entry would also be determined by regulatory approvals, the people said.

Future Meat Technologies is set to bring its cell-based technology, while Nestle has experience developing plant-based products under its Garden Gourmet brand. The company has also been expanding its range of milk alternatives, most recently adding a pea-based drink in Europe.

To complement efforts in plant-based alternatives, the company is exploring technologies that could lead to animal-friendly alternatives that are close to meat in terms of taste, flavor, and texture, Reinhard Behringer, head of the Nestle Institute of Material Sciences at Nestle Research, said in the statement.

The hybrid product, which blends meat cells developed in bioreactors with plant ingredients, could be a gateway for Nestle to tap the cultured meat market faster. Cell-based meat startups incorporate plant-based ingredients at various stages of product development. It enables them to improve the texture of products and to reduce costs, a top challenge for startups vying to displace conventional meat.

Future Meat Technologies has already been successful in reducing costs. The company has managed to produce chicken at US$4 per 100 grams (3.5 ounces) and plans to halve this by the end of 2022, Chief Executive Officer Rom Kshuk told Bloomberg in an interview last month. The company wants to begin sales in the U.S. by the end of next year, pending regulatory approvals. 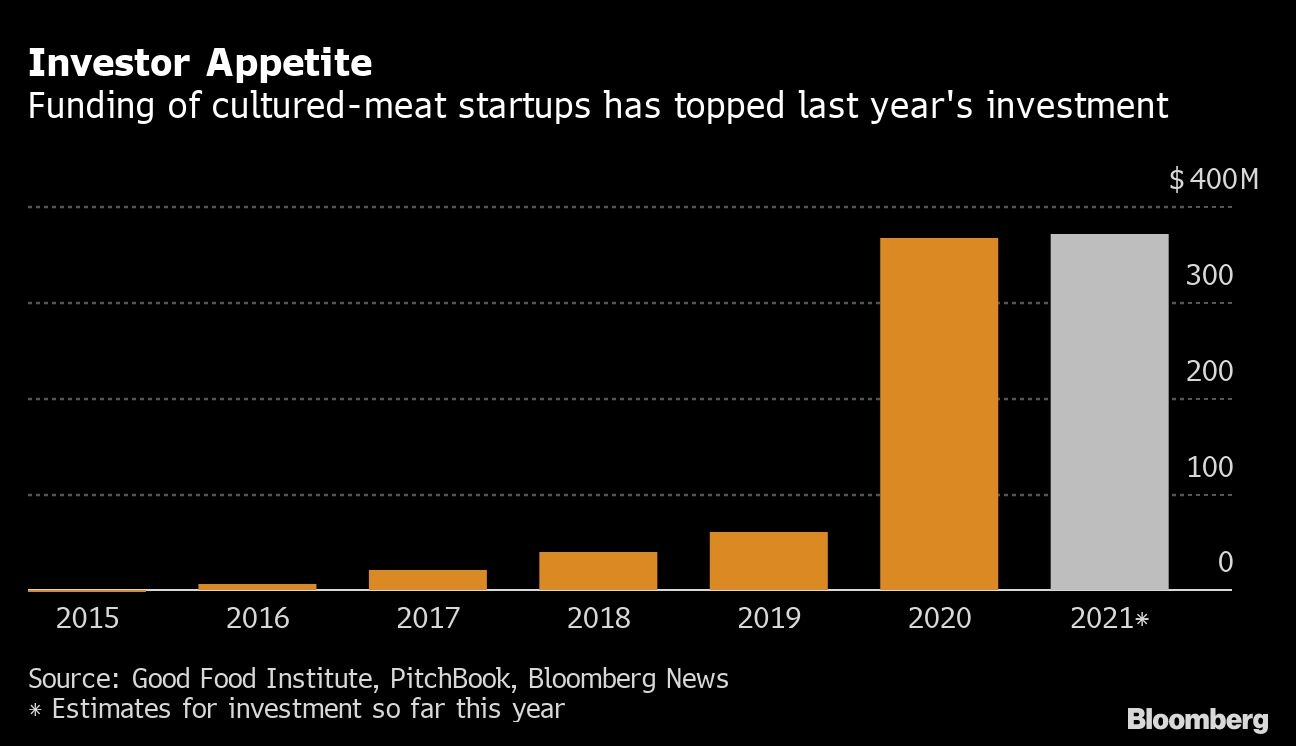 Several food and meat giants have backed cultured meat startups in recent years in recognition of the technology’s potential. Tyson Foods Inc. and Cargill Inc. have invested in the space, while BRF SA and Mitsubishi Corp. are working with Aleph Farms Ltd. The latest financing round by Aleph Farms also drew backing from Thai Union Group and South Korea’s CJ CheilJedang Corp.