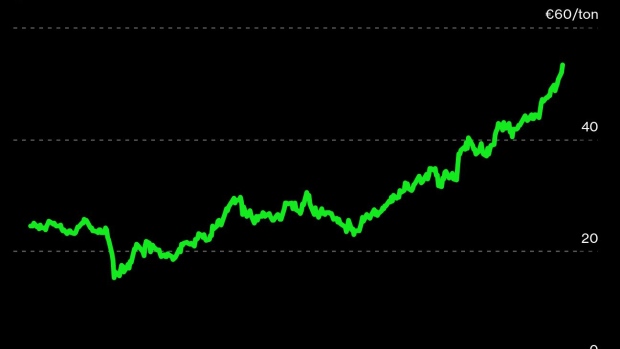 (Bloomberg) -- The Dutch government has told a consortium of companies including BP Plc and Exxon Mobil Corp. that it will spend as much as 2.1 billion euros ($2.6 billion) in the coming years to put some of their carbon emissions underground.

The project at the Port of Rotterdam could sequester about 2.5 million metric tons of carbon dioxide annually by storing it in depleted gas fields in the seabed. The four companies involved—BP, Exxon, Air Liquide SA, and Air Products and Chemicals Inc.—will receive state backing for the plan, according to Sjaak Poppe, a spokesman for the port.

Rotterdam port generated 22.4 million tons of carbon dioxide last year, about 14% of the country’s annual emissions. The carbon-capture project, known as Porthos, will trap pollution from the companies’ oil refineries and hydrogen production plants in a shared network. The gases will then be compressed and transported by pipes off the coast and pumped into a sandstone reservoir three kilometers below the seabed that once held natural gas.

The hub approach, where multiple facilities feed into a single network, is an increasingly popular way to share the costs of establishing a carbon storage facility and boost the number of polluters that can use it. Similar models are being pursued in Norway and the U.K., also supported by government funding. The Dutch subsidy is designed to prevent the four companies from incurring losses for building the hub.

While such funding has been used to accelerate the adoption of climate-friendly technologies, carbon-capture projects have received only a tiny fraction of what governments have poured into renewables, electric cars or batteries over the past decade. That’s starting to change with policy makers turning their attention to reducing emissions in the industrial sector, where carbon removal is fast becoming one of the most economical solutions.

“The government has made it clear to the four companies that want to be a part of this project,” Poppe said. “The government will fill the gap between the emissions trading system and the actual cost of the project.”

In the European Union, industrial companies are already paying more to release carbon into the atmosphere under the bloc’s emissions trading system. This year alone, the price to emit a ton of carbon has risen about 65% to more than 53 euros per metric ton.

The Dutch carbon capture system could cost companies about 80 euros per ton on average to build and operate, said Poppe. The subsidy would make up the difference by paying—at current prices—about 27 euros for every ton of emissions.

While the government has agreed to spend as much as 2.1 billion euros on the project, it could end up costing much less. The carbon price is likely to continue rising in the coming years, with EU climate chief Frans Timmermans recently saying it would need to go much higher to realize the bloc’s climate goals. Analysts at BloombegNEF expect it will surpass 100 euros by 2030.

The companies involved in the Rotterdam project have said they aim to have the carbon capture system operational by 2024. By then, the carbon price could already be high enough to eliminate the need for further government subsidies, which will be on offer for the first 15 years of the hub’s operation. It’s not clear how much the government will pay up front to fund the construction of the hub.

A separate consortium of companies is set to build the infrastructure to transport the companies’ carbon, compress it and then store it below the sea—all the steps beyond capturing the emissions. Their costs aren’t included in the 2.1 billion euros of government funding, Poppe said.

“We’re quite confident we’ll be able to take the final [investment] decisions early next year and start building,” Poppe said.