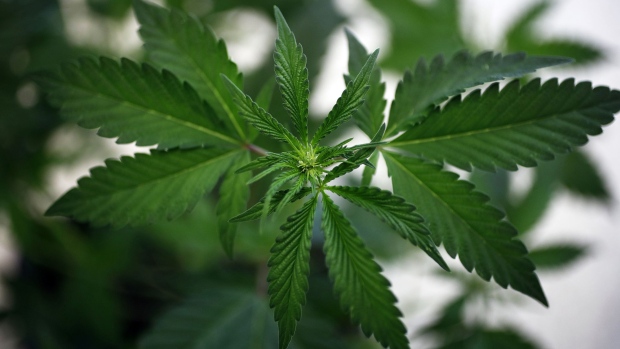 Leaves grow on a cannabis plant at the KannaSwiss GmbH greenhouse facility near Kerzers, Switzerland, on Thursday, Oct. 19, 2017. , Stefan Wermuth/Bloomberg

New Jersey will become the fourth most-populous state and the biggest on the East Coast to legalize marijuana sales for adult recreational use as voters approved ending a prohibition of the drug.

Voters passed the initiative after Governor Phil Murphy and other state lawmakers failed to legalize adult marijuana use through the legislatur. The measure was ahead with 67 per cent of voters in favor and 33% against with more than 58 per cent of precincts reported, according to Associated Press.

The ballot measure was expected to pass, with 66 per cent of likely voters supporting the initiative in a recent Stockton University poll.

New Jersey will join 11 states that have already fully legalized cannabis, including Maine and Massachusetts. Similar referendums are on Nov. 3 ballots in Arizona, Montana and South Dakota while Mississippi voters will decide whether to allow medical marijuana sales.

Legalizing recreational use may generate US$1.9 billion of sales in New Jersey, resulting in nearly US$126 million of sales-tax revenue, according to a fiscal estimate from the state’s Office of Legislative Services. Medical marijuana has been legal in New Jersey since 2010.

The push to legalize pot comes as the state plans to borrow as much as US$4.5 billion this year to cover budget deficits as the coronavirus pandemic has weakened revenue collections.

New Jersey’s legislature intends to pass enabling legislation by the end of November, according to state Senator Nicholas Scutari. The legislation would impose the state’s 6.6 per cent sales tax on cannabis and allow local governments to implement an added levy of up to 2 per cent, he said.

Lawmakers will seek to include smaller business as the industry develops in the state by offering small-scale licenses for entrepreneurs in communities already affected by black-market industries, Scutari said.

“Black marketers are going to be able to compete for licenses as well,” Scutari said. “Some of them may know more about cannabis than anyone else.”