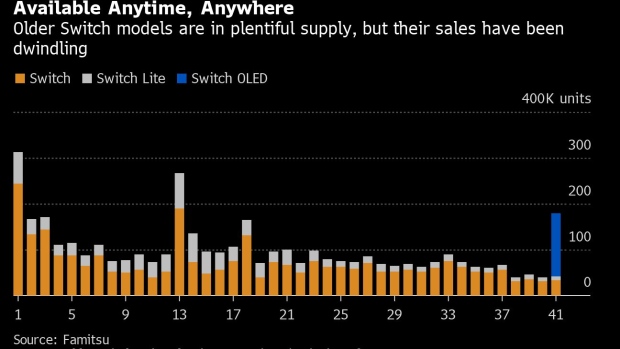 (Bloomberg) -- Nintendo Co.’s pricier new Switch console made a weak debut at home in Japan despite pre-orders selling out in a matter of minutes everywhere in the nation, a surprising result likely due to low-level supply stemming from component shortages.

The hybrid handheld’s OLED edition, released globally on Friday for $350, sold 138,409 units in the domestic market over its launch weekend, sales tracker Famitsu said Thursday. That compares with the original Switch’s inaugural weekend sales of 330,637 units in 2017 and the Switch Lite’s 177,936 units in 2019.

The new model sports a more vibrant 7-inch OLED display along with a new flexible stand, more storage space and better speakers as well as an internet cable port. Even without a widely expected graphics chip upgrade on the inside, the Switch OLED has been a trending topic on social media in major markets like Japan and the U.S., where early impressions have been overwhelmingly positive.

“The OLED model will become more popular than the standard or Lite models, supported by existing owners who would upgrade from older models or add another unit to their households,” Tokyo-based industry consultant Serkan Toto said. “Nintendo is similar to Tesla in terms of offering unique products, and just like the car company, it has a rabid fan base.”

The instant popularity of the new Switch is causing a pair of inventory problems for Kyoto-based Nintendo. On the one hand, the company is finding it tough to produce enough Switch OLED units to satisfy demand, with Japanese retailers implementing lottery draws to determine who gets to buy one. That includes Nintendo’s own flagship store in the trendy Shibuya district of Tokyo. The thin availability of the new device is set to extend at least until early next year, according to an official at a major Japanese retailer, who asked not to be named because they’re not authorized to speak publicly.

Nintendo’s production split between the upgraded new Switch, the long-established $300 original console and the $200 handheld-only Switch Lite indicated the company didn’t anticipate the OLED edition outselling the others by a large margin, according to an executive at an assembly partner. This conservative approach echoes investor concern at the time of the Switch OLED’s announcement that it didn’t represent a sufficiently impressive upgrade. It’s also leading to a potential headache of a large inventory of unsold consoles.

Famitsu’s figures show Switch and Switch Lite sales on a consistent downward trajectory this year. Unlike the pandemic-afflicted 2020, the two consoles are available in ample supply almost everywhere. Launched more than four years ago and having sold more than 73 million units to date, the Switch looks set to sustain momentum with its newest model while the original version may require a price cut in order to clear inventory, according to Ace Research Institute analyst Hideki Yasuda.

A Nintendo spokesman said the company has no plans to reduce Switch prices. It cut the standard model’s price in Europe last month largely in response to a change in currency exchange rates.

“With most people that were going to buy a Switch now owning one, seeing supply come back into balance after months of shortages could be a sign that some of the demand, especially that which was pulled forward during the height of the pandemic, is now starting to wane,” said Bloomberg Intelligence analyst Matthew Kanterman.

Striking the right production balance in its device portfolio will be a key challenge for Nintendo, with the initial Switch OLED response suggesting that the company should prioritize it.

“The OLED model is beautiful and once you see it you wouldn’t want to compromise with the standard one,” Yasuda said.