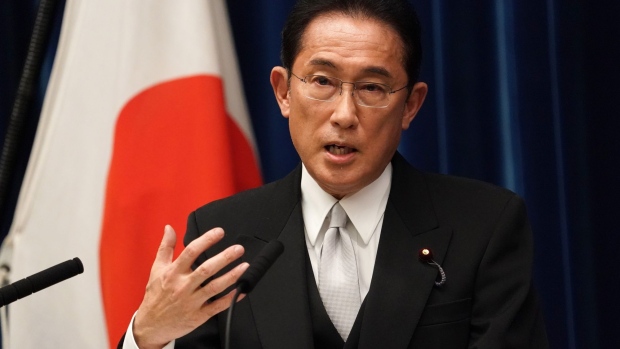 (Bloomberg) -- Japanese Prime Minister Fumio Kishida’s ruling Liberal Democratic Party is likely to keep substantially more than half the seats in parliament in this weekend’s general election, according to a media poll.

The survey by the Asahi newspaper, published late Monday, was the latest in a series of conflicting data, including another poll published by broadcaster FNN earlier the same day that found the LDP was in danger of losing its outright majority in parliament for the first time in 12 years.

Kishida’s ruling coalition is expected to remain in control of the government, but a major loss of seats for the LDP could weaken the new leader’s grip over the party and increase the chances of him joining a long list of short-serving premiers.

Almost 50% of respondents to a Bloomberg poll of economists said Kishida might be pressured to produce a bigger stimulus package if his party fares badly in the election. He’s already pledged tens of trillions of yen. The Bank of Japan is seen as standing pat on stimulus at its meeting this week, the poll found.

The Asahi survey also found the main opposition Constitutional Democratic Party is likely to stay mostly flat at 109. The newspaper polled about 354,000 people between Oct. 23-24

Five days to go to the Oct. 31 vote that determines if Kishida can keep enough seats to maintain the outright majority the LDP has held for 12 years. When parliament was dissolved for the election, the LDP held 276 seats. If the party slips below the 233 simple majority in the 465-seat lower house, it’s expected to stay in power but would need the help of junior coalition partner Komeito, which held 29 seats.

Other opposition parties include the Japan Communist Party, which held 12 seats in the lower house, Ishin, a metro-based group with 11 seats and the Democratic Party of the People with 10. Independents held 10 seats and there were four vacancies.

Almost 30% of voters plan to choose the ruling LDP in the proportional vote in Japan’s upcoming election on Oct. 31, a poll released over the weekend by Kyodo News showed. About 11% plan to vote for the main opposition party and 19% said they will pick one of the opposition parties. Around 48% said they have no positive expectations for Kishida’s economic policies, according to the Kyodo poll.

A separate poll published by NHK on Monday found 48% of respondents said they supported Kishida’s cabinet and 59% said they approved of the government’s handling of the coronavirus, as cases and deaths dwindle rapidly.