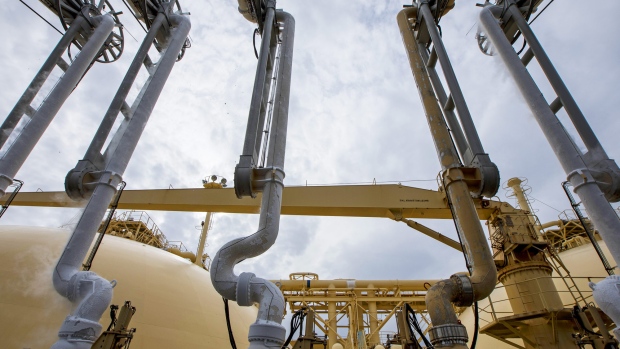 (Bloomberg) -- Liquefied natural gas may have dodged the latest round of Chinese tariffs on U.S. goods, but plans for new American terminals to ship the fuel abroad are under threat as the trade war escalates.

Tellurian Inc. and other developers will probably delay final investment decisions on multibillion-dollar U.S. LNG export projects to 2020 from this year as the tensions complicate negotiations with potential Chinese gas buyers, according to Bank of America Corp. While LNG isn’t among the goods Beijing will target in retaliatory levies that take effect next month, a 25% duty imposed in June still stands, raised from 10% previously.

The trade dispute is intensifying as roughly a dozen companies look to become part of the so-called second wave of U.S. LNG export terminals expected to start up in the next few years. Smaller developers face intense competition from deep-pocketed oil giants like Exxon Mobil Corp., Qatar Petroleum and Royal Dutch Shell Plc, which didn’t need to sign long-term contracts before greenlighting their projects. A collapse in global gas prices amid a glut of supply from the U.S. to Australia is also pressuring the industry.

For an investment decision on Tellurian’s $28 billion Driftwood project in Louisiana, “we see delays as likely given current pricing headwinds, no resolution yet on the U.S.-China trade war, and minimal contract announcements in recent months,” Bank of America analysts led by Julien Dumoulin-Smith wrote Friday in a note to clients. Joi Lecznar, a spokeswoman for Tellurian, said the company is still targeting a final investment decision this year.

Liquefied Natural Gas Ltd. will also likely push back a final investment decision on its Magnolia terminal in Louisiana to 2020 because of growing competition, and NextDecade Corp. may delay a decision on its Rio Grande project in Texas to next year, according to Cowen Inc. A representative for NextDecade didn’t immediately respond to a request for comment, and LNG Ltd. declined to comment.

Shares of Tellurian fell as much as 19% Friday, the most since March, after surging earlier in the month. NextDecade dropped as much as 13%, while LNG Ltd. slipped 2.6%.

While China is a fast-growing market for gas, it hasn’t imported any U.S. LNG since February, according to vessel tracking data compiled by Bloomberg. The Asian nation has received 62 American cargoes since 2016, putting it behind South Korea, Mexico and Japan.

Exports of U.S. shale gas have surged since 2016, when Cheniere Energy Inc. started up the Sabine Pass terminal in Louisiana, the first to ship LNG from the lower 48 states. The nation is now the world’s third-largest supplier of the fuel, after Australia and Qatar. Though two new U.S. terminals are about to begin exporting and more are under construction, failure to resolve the trade tensions could slow the industry’s rapid growth.

With cargoes to China effectively halted and deliveries to Europe easing as low prices there reduce the incentive to ship U.S. gas farther afield, South America is soaking up much of the excess supply. So far this year, Argentina, Brazil, Chile and Colombia are snapping up the most U.S. LNG on record.

LNG developers may not be the only gas players hurt by the trade rift. It’s also threatening U.S. gas producers relying on exports to ease the shale glut, particularly in the Permian Basin, where prices for the fuel dipped below zero earlier this year as pipeline bottlenecks forced drillers to pay others to take their supply.

--With assistance from Kevin Varley.

To contact the editors responsible for this story: Simon Casey at scasey4@bloomberg.net, Christine Buurma, Carlos Caminada