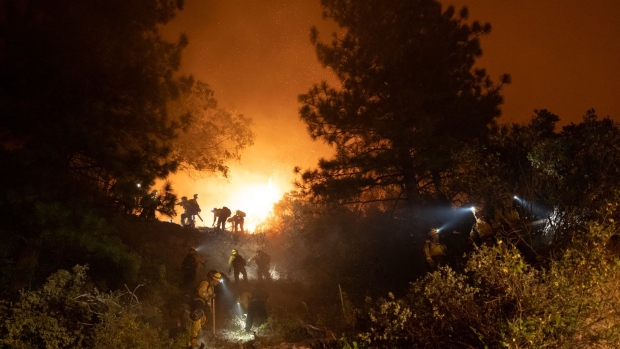 Firefighters saw trees on a hillside in order to open the path for bulldozers during the Mosquito Fire near Foresthill, California, US, on Wednesday, Sept. 7, 2022. A wildfire burning in the Tahoe National Forest exploded Wednesday afternoon prompting evacuation orders near Foresthill. , Bloomberg

Some venture capital firms specialize in fields like transportation or crypto. Convective Capital, a new investment vehicle based in California, will focus squarely on wildfires.

The fund, which debuted this month, has raised $35 million to back technology startups trying to detect, prevent or manage the spread of wildfires, a growing catastrophe for the American West and other parts of the world.

Wildfires cost an estimated $50 billion in damage a year, and for these investors, the tech in modern firefighting—from drones to weather sensors and fancy fire retardants—have hardly dented the natural and economic devastation. “There’s still a really big gap between what needs to be done and what’s being done,” says Bill Clerico, the founder and managing partner of Convective Capital.

Clerico used to worked in mobile payments. After selling his startup WePay to JPMorgan Chase & Co. in 2017, Clerico decamped to a ranch in Mendocino, north of San Francisco, where he soon met the grim reality of rural California life. A 90-acre blaze licked the access road near his house. Insurance was hard to buy.

“I was just running into wildfire all the time,” he recalls.

Clerico became a volunteer firefighter and began scouting techies working on the issue. He met the fund’s three other partners, all technologists, through philanthropic work on wildfires. Their financiers include foundations and multiple wealthy individuals with homes hit or threatened with fires, although Clerico declined to name them.

George Whitesides, another Convective Capital partner, dealt with fires constantly in the desert when he was chief executive officer at Virgin Galactic, Richard Branson’s space company. “It was an early indication of what’s coming,” he says.

Whitesides, a former NASA official, believes companies working with aircraft and space technologies can provide a major boost to fire management with communication gear during disasters or by taking stock of a fire’s toll. Convective Capital has already invested in Overstory, a software company that analyzes satellite imagery of vegetation to identify areas most likely to spark.

The fund has also backed Burnbot, a robotics startup working on controlled burns to limit fires, and Pano AI, a company building cameras for spotting new fires. The investors plan to cut about 15 more checks over the next three years for what they call “firetech.”

Clerico sees public agencies, utilities, insurance companies and landowners as target customers for the companies in his portfolio. While governments and utilities aren’t overflowing with profits, they have pledged billions to address wildfires, an urgency that could give startups more of a sales foothold. “The silver lining of the crisis that we’re in—wildfires are really a top priority, especially for utilities,” says Clerico.

Wealthy homeowners, however, have proved very willing to pay for any fix for a fire, which raises the concern that firetech might only help the rich. Clerico thinks the current system is already tilted that way. “Right now, that’s happening, tech aside,” he says. “Insurance companies are only insuring high-value properties.” He adds that his fund will encourage companies to prioritize economic inclusivity following published guidelines.

Startups might also be inclined to throw tech at a problem that may be better solved with manpower, logistics and public administration. Captain Brian Fennessy, the fire chief for Orange County, in California, says he receives pitches from startups “all the time.” Many don’t address his needs. There are a slew of companies hawking unmanned drones or aircraft to fire departments, but Fennessy believes that having a human in the air to react is preferable.

Still, Fennessy welcomes aide from Convective Capital and other venture capitalists. In particular, he’s hunting for companies that can provide accurate, up-to-date information on ground conditions during the night and when wildfires spark. “If it’s more than a minute or two late,” Fennessy says, “the fire’s already grown.”

Even though his department has two airplanes and a supercomputer at its disposal, he feels at a disadvantage. “We’ve just been outpaced and outflanked by these wildfires,” he says.